There’s no question that America is addicted to caffeine and sugar. With some of the highest obesity (35.7%) and diabetes (8.3%) rates in the world, it’s no wonder that people like New York City Mayor Michael Bloomberg are leading a crusade to force Americans to drink fewer soft drinks.

Although Mr. Bloomberg hit a brick wall in that quest after a court blocked his appeal to ban restaurants from serving large (16 oz. and up) sugared beverages in June, investors are still wondering if the beverages industry — once considered a conservative, recession-proof one — is still worth investing in. 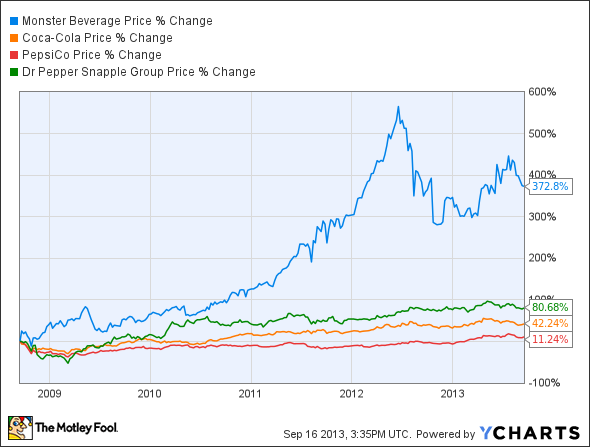 Is this Monster Dangerous?

Energy drink maker Monster Beverage Corp (NASDAQ:MNST) has been a major source of controversy ever since the deaths of a 14-year-old girl last March and a 19-year-old man last July. Both deaths were due to cardiac arrest allegedly caused by the energy drink’s high caffeine content. Monster’s energy drinks all contain more caffeine than caffeinated soda, and several of them have higher caffeine content than coffee. Some doctors believe that the drink’s caffeine effect can be magnified by other ingredients like taurine and guarana.

Despite these troubles, consumers are still addicted to energy drinks. Monster Beverage Corp (NASDAQ:MNST)’s sales still climbed 6.5% year on year last quarter despite the negative press, although its profit slipped 2.7%. Shares have been flat over the past 12 months but have advanced more than 300% over the past five years.

Flat Growth Ahead for the Kings of Cola

The Coca-Cola Company (NYSE:KO) and PepsiCo, Inc. (NYSE:PEP) have both been trying to dent Monster Beverage Corp (NASDAQ:MNST)’s market share over the past several years. Coca-Cola, which was rumored to be interested in acquiring Monster last year, has promoted its own energy drinks such as NOS, Full Throttle, Surge, and Vault. Pepsi introduced a “high voltage” version of Mountain Dew along with energy drinks Amp and Kickstart. None of these products have made a dent in the primary market dominated by Monster Beverage Corp (NASDAQ:MNST) and Red Bull, however.

The rest of The Coca-Cola Company (NYSE:KO)’s drinks haven’t substantially boosted sales either. The soft drink giant’s revenue and earnings declined 2.6% and 4%, respectively, last quarter due primarily to poor weather across the world and flat growth in China.

PepsiCo, Inc. (NYSE:PEP), on the other hand, has a more diversified business of snack foods and beverages. This helped it avoid The Coca-Cola Company (NYSE:KO)’s fate in the last quarter. Pepsi’s revenue climbed 2.1% year on year as earnings surged 35.1% — with most of that profit boost attributed to its Frito Lays snack foods division.

Are “Healthier” Soft Drinks the Answer?

The lesson is clear, however — the soft drink business, by itself, is not a high-growth one. Sugary sodas are waning in popularity as public campaigns to limit consumption are gaining traction.

Both The Coca-Cola Company (NYSE:KO) and PepsiCo, Inc. (NYSE:PEP) must offer more low-sugar versions of their drinks or try to generate more sales with alternative drinks to remain relevant. The two companies have introduced low-calorie and low-sugar versions of their popular drinks, such as Coca-Cola Zero and Pepsi Next, but concerns remain about the safety of the artificial sweeteners used in these products.

Can the Underdog Take a Bite out of the Market?