Were Hedge Funds (They Aren’t All Short) Right About Tesla Inc. (TSLA)?

In these volatile markets we scrutinize hedge fund filings to get a reading on which direction each stock might be going. The latest 13F reporting period has come and gone, and Insider Monkey is again at the forefront when it comes to making use of this gold mine of data. We have processed the filings of the more than 835 world-class investment firms that we track and now have access to the collective wisdom contained in these filings, which are based on their December 31 holdings, data that is available nowhere else. Should you consider Tesla Inc. (NASDAQ:TSLA) for your portfolio? We’ll look to this invaluable collective wisdom for the answer.

Tesla Inc. (NASDAQ:TSLA) investors should be aware of an increase in activity from the world’s largest hedge funds recently. Our calculations also showed that TSLA isn’t among the 30 most popular stocks among hedge funds (click for Q4 rankings and see the video at the end of this article for Q3 rankings).

Keeping this in mind we’re going to take a look at the latest hedge fund action regarding Tesla Inc. (NASDAQ:TSLA).

At Q4’s end, a total of 51 of the hedge funds tracked by Insider Monkey were long this stock, a change of 59% from the previous quarter. By comparison, 47 hedge funds held shares or bullish call options in TSLA a year ago. With hedge funds’ capital changing hands, there exists a few notable hedge fund managers who were boosting their stakes substantially (or already accumulated large positions). 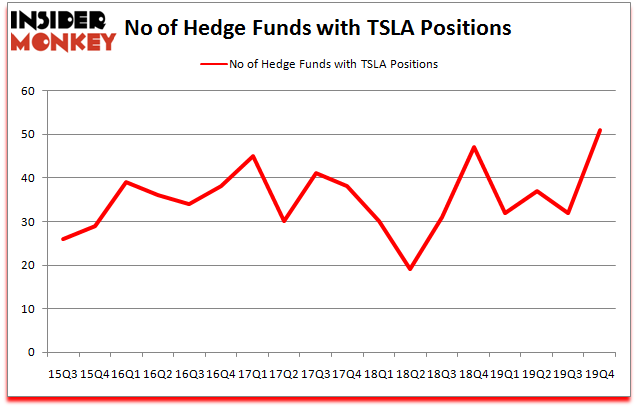 Among these funds, Citadel Investment Group held the most valuable stake in Tesla Inc. (NASDAQ:TSLA), which was worth $1953.8 million at the end of the third quarter. On the second spot was Renaissance Technologies which amassed $1647.4 million worth of shares. D E Shaw, PEAK6 Capital Management, and Zevenbergen Capital Investments were also very fond of the stock, becoming one of the largest hedge fund holders of the company. In terms of the portfolio weights assigned to each position Tao Capital allocated the biggest weight to Tesla Inc. (NASDAQ:TSLA), around 21.03% of its 13F portfolio. Ariose Capital is also relatively very bullish on the stock, dishing out 14.09 percent of its 13F equity portfolio to TSLA.

Let’s go over hedge fund activity in other stocks – not necessarily in the same industry as Tesla Inc. (NASDAQ:TSLA) but similarly valued. We will take a look at CNOOC Limited (NYSE:CEO), The Estee Lauder Companies Inc (NYSE:EL), Automatic Data Processing, Inc. (NASDAQ:ADP), and Becton, Dickinson and Company (NYSE:BDX). This group of stocks’ market valuations are similar to TSLA’s market valuation.

As you can see these stocks had an average of 41.25 hedge funds with bullish positions and the average amount invested in these stocks was $1550 million. That figure was $3044 million in TSLA’s case. Automatic Data Processing, Inc. (NASDAQ:ADP) is the most popular stock in this table. On the other hand CNOOC Limited (NYSE:CEO) is the least popular one with only 14 bullish hedge fund positions. Tesla Inc. (NASDAQ:TSLA) is not the most popular stock in this group but hedge fund interest is still above average. Our calculations showed that top 10 most popular stocks among hedge funds returned 41.4% in 2019 and outperformed the S&P 500 ETF (SPY) by 10.1 percentage points. These stocks gained 1.0% in 2020 through May 1st but still beat the market by 12.9 percentage points. Hedge funds were also right about betting on TSLA as the stock returned 67.6% in 2020 (through May 1st) and outperformed the market. Hedge funds were rewarded for their relative bullishness.