Were Hedge Funds Right About Warming Up To KBR, Inc. (KBR)?

After several tireless days we have finished crunching the numbers from nearly 750 13F filings issued by the elite hedge funds and other investment firms that we track at Insider Monkey, which disclosed those firms’ equity portfolios as of June 28. The results of that effort will be put on display in this article, as we share valuable insight into the smart money sentiment towards KBR, Inc. (NYSE:KBR).

KBR, Inc. (NYSE:KBR) investors should be aware of an increase in support from the world’s most elite money managers recently. Our calculations also showed that KBR isn’t among the 30 most popular stocks among hedge funds (see the video below).

What does smart money think about KBR, Inc. (NYSE:KBR)? 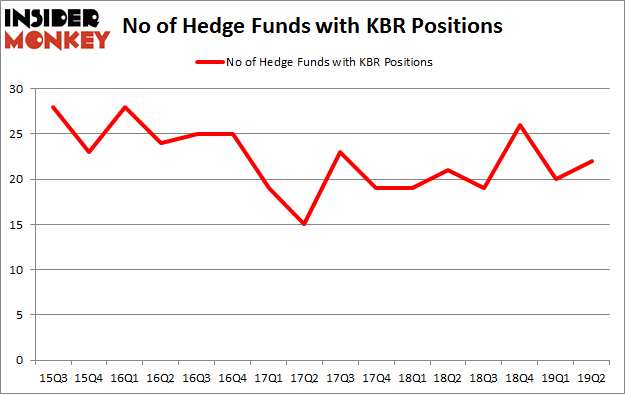 As you can see these stocks had an average of 14.25 hedge funds with bullish positions and the average amount invested in these stocks was $189 million. That figure was $600 million in KBR’s case. Mercury General Corporation (NYSE:MCY) is the most popular stock in this table. On the other hand AppFolio Inc (NASDAQ:APPF) is the least popular one with only 12 bullish hedge fund positions. Compared to these stocks KBR, Inc. (NYSE:KBR) is more popular among hedge funds. Our calculations showed that top 20 most popular stocks among hedge funds returned 24.4% in 2019 through September 30th and outperformed the S&P 500 ETF (SPY) by 4 percentage points. Unfortunately KBR wasn’t nearly as popular as these 20 stocks and hedge funds that were betting on KBR were disappointed as the stock returned -1.3% during the third quarter and underperformed the market. If you are interested in investing in large cap stocks with huge upside potential, you should check out the top 20 most popular stocks among hedge funds as many of these stocks already outperformed the market in Q3.

Aramark (ARMK): Hedge Funds Are In A Wait-and-See Mode
Monthly Newsletter Strategy
Download a free copy of our newsletter and see the details inside!
Hedge Fund Resource Center
Related News
Were Hedge Funds Right About Flocking Into KBR, Inc. (KBR)? Is KBR, Inc. (KBR) A Good Stock To Buy? 12 Largest Construction Companies in US in 2017 17 Biggest Construction Companies in America in 2017 Do Hedge Funds Love KBR, Inc. (KBR)? KBR Inc. (KBR), Autohome Inc. (ADR) (ATHM) & More: Here’s Why These Stocks Are on Investors’ Radars Why Amazon.com, Inc. (AMZN), Himax Technologies, Inc. (ADR) (HIMX), and Three Other Stocks Are Trending Today 11 Largest Auto Insurance Companies In The US In 2019 10 Poorest Cities in America in 2019 8 Lowest Tar and Nicotine Cigarette Brands in 2019
Billionaire Hedge Funds