Is Texas Instruments Incorporated (NASDAQ:TXN) a buy right now? Prominent investors are turning less bullish. The number of long hedge fund positions were cut by 4 in recent months. Our calculations also showed that TXN isn’t among the 30 most popular stocks among hedge funds. TXN was in 44 hedge funds’ portfolios at the end of the fourth quarter of 2018. There were 48 hedge funds in our database with TXN positions at the end of the previous quarter.

What have hedge funds been doing with Texas Instruments Incorporated (NASDAQ:TXN)?

Heading into the first quarter of 2019, a total of 44 of the hedge funds tracked by Insider Monkey were long this stock, a change of -8% from one quarter earlier. On the other hand, there were a total of 41 hedge funds with a bullish position in TXN a year ago. With the smart money’s sentiment swirling, there exists an “upper tier” of noteworthy hedge fund managers who were boosting their holdings significantly (or already accumulated large positions). 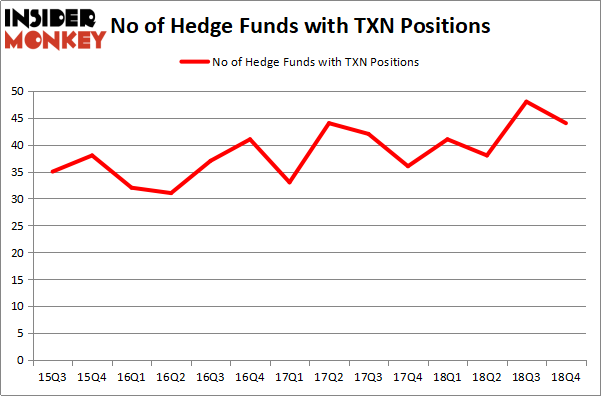 When looking at the institutional investors followed by Insider Monkey, Generation Investment Management, managed by David Blood and Al Gore, holds the most valuable position in Texas Instruments Incorporated (NASDAQ:TXN). Generation Investment Management has a $538.1 million position in the stock, comprising 4.5% of its 13F portfolio. Coming in second is AQR Capital Management, led by Cliff Asness, holding a $326.6 million position; the fund has 0.4% of its 13F portfolio invested in the stock. Other members of the smart money that are bullish comprise Ric Dillon’s Diamond Hill Capital, John Overdeck and David Siegel’s Two Sigma Advisors and Alex Snow’s Lansdowne Partners.

Judging by the fact that Texas Instruments Incorporated (NASDAQ:TXN) has faced falling interest from the smart money, it’s safe to say that there were a few money managers who were dropping their full holdings last quarter. At the top of the heap, John Hurley’s Cavalry Asset Management said goodbye to the largest position of all the hedgies followed by Insider Monkey, totaling about $37.4 million in stock, and Matthew Tewksbury’s Stevens Capital Management was right behind this move, as the fund sold off about $14.2 million worth. These moves are important to note, as total hedge fund interest was cut by 4 funds last quarter.

As you can see these stocks had an average of 44.25 hedge funds with bullish positions and the average amount invested in these stocks was $3346 million. That figure was $2402 million in TXN’s case. Thermo Fisher Scientific Inc. (NYSE:TMO) is the most popular stock in this table. On the other hand Itau Unibanco Holding SA (NYSE:ITUB) is the least popular one with only 18 bullish hedge fund positions. Texas Instruments Incorporated (NASDAQ:TXN) is not the least popular stock in this group but hedge fund interest is still below average. Our calculations showed that top 15 most popular stocks among hedge funds returned 19.7% through March 15th and outperformed the S&P 500 ETF (SPY) by 6.6 percentage points. Hedge funds were also right about betting on TXN, though not to the same extent, as the stock returned 18.1% and outperformed the market as well.