At Insider Monkey, we pore over the filings of nearly 750 top investment firms every quarter, a process we have now completed for the latest reporting period. The data we’ve gathered as a result gives us access to a wealth of collective knowledge based on these firms’ portfolio holdings as of December 31. In this article, we will use that wealth of knowledge to determine whether or not Spotify Technology S.A. (NYSE:SPOT) makes for a good investment right now. 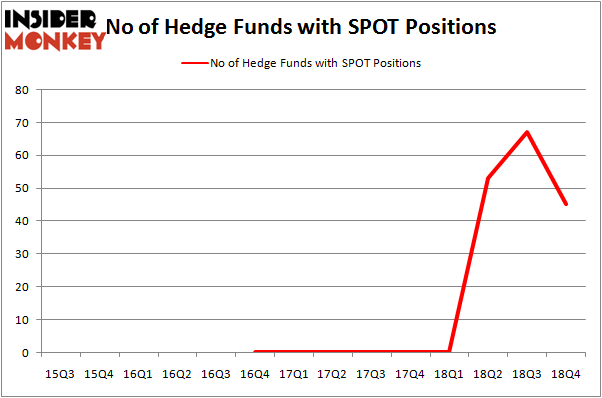 Because Spotify Technology S.A. (NYSE:SPOT) has witnessed bearish sentiment from hedge fund managers, we can see that there was a specific group of hedge funds who sold off their full holdings heading into Q3. Intriguingly, Alex Snow’s Lansdowne Partners dropped the biggest investment of the 700 funds monitored by Insider Monkey, comprising an estimated $185.6 million in stock, and Josh Resnick’s Jericho Capital Asset Management was right behind this move, as the fund sold off about $185.5 million worth. These moves are interesting, as aggregate hedge fund interest was cut by 22 funds heading into Q3.

As you can see these stocks had an average of 25 hedge funds with bullish positions and the average amount invested in these stocks was $752 million. That figure was $2878 million in SPOT’s case. M&T Bank Corporation (NYSE:MTB) is the most popular stock in this table. On the other hand Telefonica Brasil SA (NYSE:VIV) is the least popular one with only 12 bullish hedge fund positions. Compared to these stocks Spotify Technology S.A. (NYSE:SPOT) is more popular among hedge funds. Our calculations showed that top 15 most popular stocks among hedge funds returned 19.7% through March 15th and outperformed the S&P 500 ETF (SPY) by 6.6 percentage points. Hedge funds were also right about betting on Spotify as the stock returned 25% and outperformed the market as well.

Here is What Hedge Funds Think About AutoZone Inc. (AZO)
Monthly Newsletter Strategy
Download a free copy of our newsletter and see the details inside!
Hedge Fund Resource Center
Related News
Is Spotify Technology S.A. (SPOT) A Good Stock To Buy According To Hedge Funds? Why Spotify’s Free App Upgrade Is Such A Big Win For Investors Ten of the Most Common Addictions 13 African Countries with the Largest White Population in 2018 6 Causes of Human Trafficking in Africa, India, and US
Billionaire Hedge Funds