Were Hedge Funds Right About Souring On Teva Pharmaceutical (TEVA)?

Is Teva Pharmaceutical Industries Limited (NYSE:TEVA) the right pick for your portfolio? Prominent investors are selling. The number of long hedge fund positions shrunk by 1 lately. Our calculations also showed that TEVA isn’t among the 30 most popular stocks among hedge funds.

Heading into the first quarter of 2019, a total of 35 of the hedge funds tracked by Insider Monkey were long this stock, a change of -3% from the previous quarter. Below, you can check out the change in hedge fund sentiment towards TEVA over the last 14 quarters. So, let’s examine which hedge funds were among the top holders of the stock and which hedge funds were making big moves. 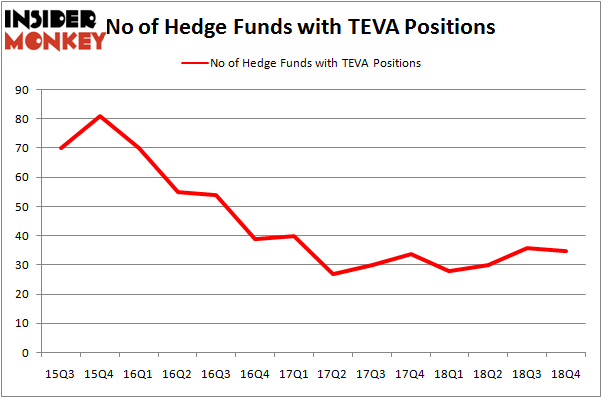 Due to the fact that Teva Pharmaceutical Industries Limited (NYSE:TEVA) has experienced a decline in interest from hedge fund managers, we can see that there were a few fund managers that elected to cut their positions entirely by the end of the third quarter. At the top of the heap, Steve Cohen’s Point72 Asset Management dropped the biggest investment of all the hedgies monitored by Insider Monkey, comprising about $8.9 million in stock, and Miguel Fidalgo’s Triarii Capital was right behind this move, as the fund dropped about $4.7 million worth. These bearish behaviors are interesting, as total hedge fund interest was cut by 1 funds by the end of the third quarter.

As you can see these stocks had an average of 28.75 hedge funds with bullish positions and the average amount invested in these stocks was $1255 million. That figure was $2006 million in TEVA’s case. Expedia Group, Inc. (NASDAQ:EXPE) is the most popular stock in this table. On the other hand KB Financial Group, Inc. (NYSE:KB) is the least popular one with only 6 bullish hedge fund positions. Teva Pharmaceutical Industries Limited (NYSE:TEVA) is not the most popular stock in this group but hedge fund interest is still above average. This is a slightly positive signal but we’d rather spend our time researching stocks that hedge funds are piling on. Our calculations showed that top 15 most popular stocks among hedge funds returned 19.7% through March 15th and outperformed the S&P 500 ETF (SPY) by 6.6 percentage points. Unfortunately TEVA wasn’t in this group. Hedge funds that bet on TEVA were disappointed as the stock returned 7.1% and underperformed the market. If you are interested in investing in large cap stocks, you should check out the top 15 hedge fund stocks as 13 of these outperformed the market.