Were Hedge Funds Right About Souring On CyrusOne Inc (CONE)?

The market has been volatile in the fourth quarter as the Federal Reserve continued its rate hikes to normalize the interest rates. Small cap stocks have been hit hard as a result, as the Russell 2000 ETF (IWM) has underperformed the larger S&P 500 ETF (SPY) by nearly 7 percentage points. SEC filings and hedge fund investor letters indicate that the smart money seems to be paring back their overall long exposure since summer months, and the funds’ movements is one of the reasons why the major indexes have retraced. In this article, we analyze what the smart money thinks of CyrusOne Inc (NASDAQ:CONE) and find out how it is affected by hedge funds’ moves.

Is CyrusOne Inc (NASDAQ:CONE) a worthy investment right now? The smart money is selling. The number of bullish hedge fund bets decreased by 10 in recent months. Our calculations also showed that CONE isn’t among the 30 most popular stocks among hedge funds. CONE was in 14 hedge funds’ portfolios at the end of December. There were 24 hedge funds in our database with CONE positions at the end of the previous quarter.

In the financial world there are tons of tools shareholders have at their disposal to assess their stock investments. A duo of the most innovative tools are hedge fund and insider trading activity. Our experts have shown that, historically, those who follow the best picks of the top fund managers can beat the market by a healthy margin (see the details here).

At the end of the fourth quarter, a total of 14 of the hedge funds tracked by Insider Monkey held long positions in this stock, a change of -42% from one quarter earlier. The graph below displays the number of hedge funds with bullish position in CONE over the last 14 quarters. With the smart money’s positions undergoing their usual ebb and flow, there exists a few notable hedge fund managers who were increasing their stakes substantially (or already accumulated large positions). 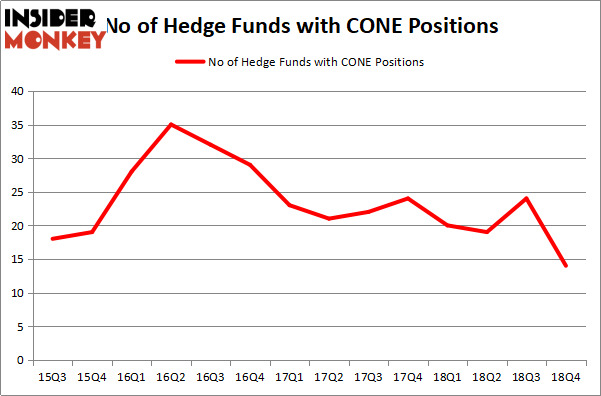 More specifically, AEW Capital Management was the largest shareholder of CyrusOne Inc (NASDAQ:CONE), with a stake worth $47.8 million reported as of the end of September. Trailing AEW Capital Management was Fisher Asset Management, which amassed a stake valued at $31.6 million. Crosslink Capital, Driehaus Capital, and Ancora Advisors were also very fond of the stock, giving the stock large weights in their portfolios.

Due to the fact that CyrusOne Inc (NASDAQ:CONE) has experienced a decline in interest from the aggregate hedge fund industry, it’s safe to say that there were a few fund managers that slashed their full holdings last quarter. It’s worth mentioning that Ken Griffin’s Citadel Investment Group dropped the biggest position of all the hedgies monitored by Insider Monkey, comprising about $63.4 million in stock. Malcolm Fairbairn’s fund, Ascend Capital, also cut its stock, about $8 million worth. These bearish behaviors are important to note, as total hedge fund interest fell by 10 funds last quarter.

As you can see these stocks had an average of 26 hedge funds with bullish positions and the average amount invested in these stocks was $620 million. That figure was $124 million in CONE’s case. Axalta Coating Systems Ltd (NYSE:AXTA) is the most popular stock in this table. On the other hand Harley-Davidson, Inc. (NYSE:HOG) is the least popular one with only 19 bullish hedge fund positions. Compared to these stocks CyrusOne Inc (NASDAQ:CONE) is even less popular than HOG. Our calculations showed that top 15 most popular stocks among hedge funds returned 21.3% through April 8th and outperformed the S&P 500 ETF (SPY) by more than 5 percentage points. Unfortunately CONE wasn’t in this group. Hedge funds that bet on CONE were disappointed as the stock returned 4.3% and underperformed the market. If you are interested in investing in large cap stocks, you should check out the top 15 hedge fund stocks as 12 of these outperformed the market.