The financial regulations require hedge funds and wealthy investors that crossed the $100 million equity holdings threshold to file a report that shows their positions at the end of every quarter. Even though it isn’t the intention, these filings to a certain extent level the playing field for ordinary investors. The latest round of 13F filings disclosed the funds’ positions on June 28th. We at Insider Monkey have made an extensive database of nearly 750 of those established hedge funds and famous value investors’ filings. In this article, we analyze how these elite funds and prominent investors traded Entravision Communication Corporation (NYSE:EVC) based on those filings.

Entravision Communication Corporation (NYSE:EVC) investors should pay attention to an increase in support from the world’s most elite money managers in recent months. Our calculations also showed that EVC isn’t among the 30 most popular stocks among hedge funds (see the video below).

In addition to following the biggest hedge funds for investment ideas, we also share stock pitches from conferences, investor letters and other sources  like this one where the fund manager is talking about two under the radar 1000% return potential stocks: first one in internet infrastructure and the second in the heart of advertising market. We use hedge fund buy/sell signals to determine whether to conduct in-depth analysis of these stock ideas which take days. Let’s check out the key hedge fund action regarding Entravision Communication Corporation (NYSE:EVC).

What have hedge funds been doing with Entravision Communication Corporation (NYSE:EVC)?

At Q2’s end, a total of 15 of the hedge funds tracked by Insider Monkey were long this stock, a change of 36% from one quarter earlier. The graph below displays the number of hedge funds with bullish position in EVC over the last 16 quarters. With hedgies’ capital changing hands, there exists a few key hedge fund managers who were upping their holdings considerably (or already accumulated large positions). 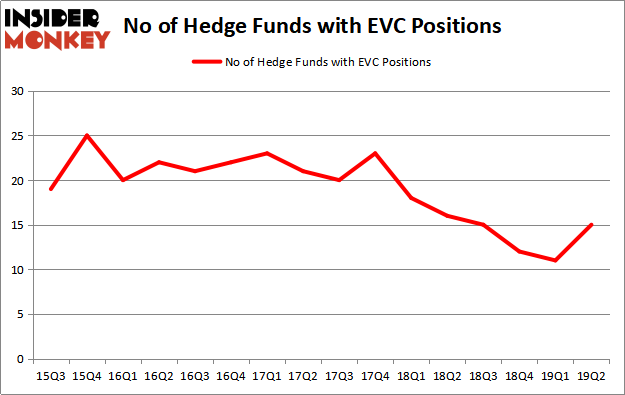 When looking at the institutional investors followed by Insider Monkey, AQR Capital Management, managed by Cliff Asness, holds the number one position in Entravision Communication Corporation (NYSE:EVC). AQR Capital Management has a $7.2 million position in the stock, comprising less than 0.1%% of its 13F portfolio. Coming in second is Renaissance Technologies which holds a $5.1 million position; less than 0.1%% of its 13F portfolio is allocated to the company. Some other members of the smart money with similar optimism consist of D. E. Shaw’s D E Shaw, Israel Englander’s Millennium Management and John Overdeck and David Siegel’s Two Sigma Advisors.

With a general bullishness amongst the heavyweights, some big names were breaking ground themselves. Marshall Wace LLP, managed by Paul Marshall and Ian Wace, initiated the most valuable position in Entravision Communication Corporation (NYSE:EVC). Marshall Wace LLP had $0.7 million invested in the company at the end of the quarter. Thomas Bailard’s Bailard Inc also made a $0.2 million investment in the stock during the quarter. The following funds were also among the new EVC investors: David Harding’s Winton Capital Management, John M. Angelo and Michael L. Gordon’s Angelo Gordon & Co, and Gavin Saitowitz and Cisco J. del Valle’s Springbok Capital.

As you can see these stocks had an average of 6.25 hedge funds with bullish positions and the average amount invested in these stocks was $21 million. That figure was $21 million in EVC’s case. Mesa Air Group, Inc. (NASDAQ:MESA) is the most popular stock in this table. On the other hand Pulse Biosciences, Inc (NASDAQ:PLSE) is the least popular one with only 1 bullish hedge fund positions. Entravision Communication Corporation (NYSE:EVC) is not the most popular stock in this group but hedge fund interest is still above average. Our calculations showed that top 20 most popular stocks among hedge funds returned 24.4% in 2019 through September 30th and outperformed the S&P 500 ETF (SPY) by 4 percentage points. Hedge funds were also right about betting on EVC, though not to the same extent, as the stock returned 3.5% during the third quarter and outperformed the market as well.