In these volatile markets we scrutinize hedge fund filings to get a reading on which direction each stock might be going. Insider Monkey has processed numerous 13F filings of hedge funds and successful value investors to create an extensive database of hedge fund holdings. The 13F filings show the hedge funds’ and successful investors’ positions as of the end of the fourth quarter. You can find articles about an individual hedge fund’s trades on numerous financial news websites. However, in this article we will take a look at their collective moves over the last 4 years and analyze what the smart money thinks of Snap Inc. (NYSE:SNAP) based on that data.

Snap Inc. (NYSE:SNAP) was in 66 hedge funds’ portfolios at the end of December. SNAP shareholders have witnessed an increase in activity from the world’s largest hedge funds recently. There were 54 hedge funds in our database with SNAP positions at the end of the previous quarter. Our calculations also showed that SNAP isn’t among the 30 most popular stocks among hedge funds (click for Q4 rankings and see the video at the end of this article for Q3 rankings).

We leave no stone unturned when looking for the next great investment idea. For example, this trader is claiming triple digit returns, so we check out his latest trade recommendations. We read hedge fund investor letters and listen to stock pitches at hedge fund conferences (by the way watch this video if you want to hear one of the best healthcare hedge fund manager’s coronavirus analysis). Our best call in 2020 was shorting the market when S&P 500 was trading at 3150 after realizing the coronavirus pandemic’s significance before most investors. Keeping this in mind let’s analyze the latest hedge fund action surrounding Snap Inc. (NYSE:SNAP).

Heading into the first quarter of 2020, a total of 66 of the hedge funds tracked by Insider Monkey held long positions in this stock, a change of 22% from the third quarter of 2019. On the other hand, there were a total of 17 hedge funds with a bullish position in SNAP a year ago. With hedge funds’ sentiment swirling, there exists a few notable hedge fund managers who were upping their stakes meaningfully (or already accumulated large positions). 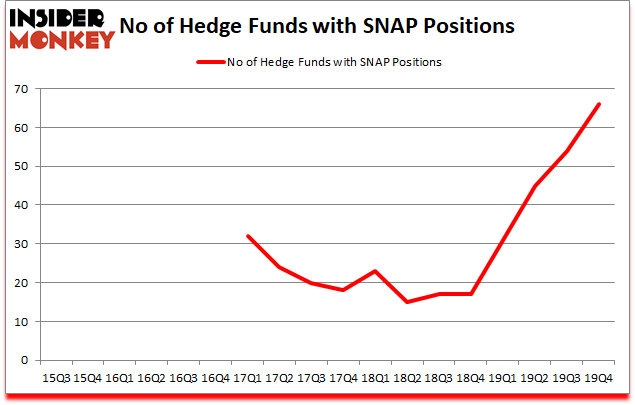 According to publicly available hedge fund and institutional investor holdings data compiled by Insider Monkey, Ken Griffin’s Citadel Investment Group has the number one position in Snap Inc. (NYSE:SNAP), worth close to $331 million, amounting to 0.1% of its total 13F portfolio. Sitting at the No. 2 spot is Slate Path Capital, managed by David Greenspan, which holds a $236.9 million position; 12.8% of its 13F portfolio is allocated to the company. Some other members of the smart money that hold long positions include Philippe Laffont’s Coatue Management, D. E. Shaw’s D E Shaw and Renaissance Technologies. In terms of the portfolio weights assigned to each position Slate Path Capital allocated the biggest weight to Snap Inc. (NYSE:SNAP), around 12.76% of its 13F portfolio. EastBay Asset Management is also relatively very bullish on the stock, designating 11.69 percent of its 13F equity portfolio to SNAP.

As industrywide interest jumped, key money managers have been driving this bullishness. Woodline Partners, managed by Michael Rockefeller and Karl Kroeker, initiated the most valuable position in Snap Inc. (NYSE:SNAP). Woodline Partners had $56.1 million invested in the company at the end of the quarter. Stanley Druckenmiller’s Duquesne Capital also initiated a $32 million position during the quarter. The other funds with new positions in the stock are Zach Schreiber’s Point State Capital, Gavin Baker’s Atreides Management, and Steve Cohen’s Point72 Asset Management.

As you can see these stocks had an average of 37.5 hedge funds with bullish positions and the average amount invested in these stocks was $2190 million. That figure was $2389 million in SNAP’s case. Palo Alto Networks Inc (NYSE:PANW) is the most popular stock in this table. On the other hand Best Buy Co., Inc. (NYSE:BBY) is the least popular one with only 25 bullish hedge fund positions. Compared to these stocks Snap Inc. (NYSE:SNAP) is more popular among hedge funds. Our calculations showed that top 10 most popular stocks among hedge funds returned 41.4% in 2019 and outperformed the S&P 500 ETF (SPY) by 10.1 percentage points. These stocks lost 1.0% in 2020 through April 20th and still beat the market by 11 percentage points. Unfortunately SNAP wasn’t nearly as popular as these 10 stocks and hedge funds that were betting on SNAP were disappointed as the stock returned -20.9% during the three months of 2020 (through April 20th) and underperformed the market. If you are interested in investing in large cap stocks with huge upside potential, you should check out the top 10 most popular stocks among hedge funds as most of these stocks already outperformed the market in 2020.