In these volatile markets we scrutinize hedge fund filings to get a reading on which direction each stock might be going. How do you pick the next stock to invest in? One way would be to spend days of research browsing through thousands of publicly traded companies. However, an easier way is to look at the stocks that smart money investors are collectively bullish on. Hedge funds and other institutional investors usually invest large amounts of capital and have to conduct due diligence while choosing their next pick. They don’t always get it right, but, on average, their stock picks historically generated strong returns after adjusting for known risk factors. With this in mind, let’s take a look at the recent hedge fund activity surrounding Regenxbio Inc (NASDAQ:RGNX).

Is Regenxbio Inc (NASDAQ:RGNX) a worthy stock to buy now? The smart money is becoming more confident. The number of bullish hedge fund positions inched up by 7 recently. Our calculations also showed that RGNX isn’t among the 30 most popular stocks among hedge funds (click for Q4 rankings and see the video at the end of this article for Q3 rankings).

We leave no stone unturned when looking for the next great investment idea. For example, this investor can predict short term winners following earnings announcements with 77% accuracy, so we check out his stock picks. A former hedge fund manager is pitching the “next Amazon” in this video; again we are listening. We read hedge fund investor letters and listen to stock pitches at hedge fund conferences. Our best call in 2020 was shorting the market when S&P 500 was trading at 3150 after realizing the coronavirus pandemic’s significance before most investors. Now we’re going to analyze the fresh hedge fund action encompassing Regenxbio Inc (NASDAQ:RGNX).

What does smart money think about Regenxbio Inc (NASDAQ:RGNX)? 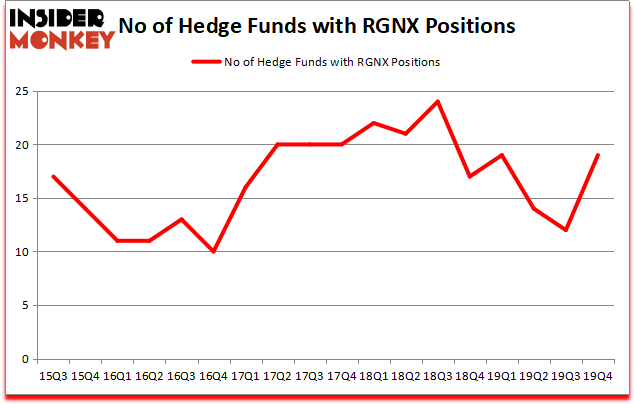 The largest stake in Regenxbio Inc (NASDAQ:RGNX) was held by Redmile Group, which reported holding $102.8 million worth of stock at the end of September. It was followed by Water Street Capital with a $29.6 million position. Other investors bullish on the company included Perceptive Advisors, Sonic Capital, and Hillhouse Capital Management. In terms of the portfolio weights assigned to each position Sonic Capital allocated the biggest weight to Regenxbio Inc (NASDAQ:RGNX), around 19.59% of its 13F portfolio. Aquilo Capital Management is also relatively very bullish on the stock, dishing out 4.14 percent of its 13F equity portfolio to RGNX.

As aggregate interest increased, specific money managers have been driving this bullishness. Sonic Capital, managed by Lawrence Kam, established the most outsized position in Regenxbio Inc (NASDAQ:RGNX). Sonic Capital had $19.1 million invested in the company at the end of the quarter. Marc Schneidman’s Aquilo Capital Management also made a $11 million investment in the stock during the quarter. The following funds were also among the new RGNX investors: David Harding’s Winton Capital Management, Israel Englander’s Millennium Management, and Greg Martinez’s Parkman Healthcare Partners.

As you can see these stocks had an average of 16 hedge funds with bullish positions and the average amount invested in these stocks was $135 million. That figure was $235 million in RGNX’s case. Dicerna Pharmaceuticals Inc (NASDAQ:DRNA) is the most popular stock in this table. On the other hand Cortexyme, Inc. (NASDAQ:CRTX) is the least popular one with only 1 bullish hedge fund positions. Regenxbio Inc (NASDAQ:RGNX) is not the most popular stock in this group but hedge fund interest is still above average. Our calculations showed that top 10 most popular stocks among hedge funds returned 41.4% in 2019 and outperformed the S&P 500 ETF (SPY) by 10.1 percentage points. These stocks gained 1.0% in 2020 through May 1st but still beat the market by 12.9 percentage points. Hedge funds were also right about betting on RGNX, though not to the same extent, as the stock returned -11% during the first four months of 2020 (through May 1st) and outperformed the market as well.