In these volatile markets we scrutinize hedge fund filings to get a reading on which direction each stock might be going. Keeping this in mind let’s see whether QUALCOMM, Incorporated (NASDAQ:QCOM) represents a good buying opportunity at the moment. Let’s quickly check the hedge fund interest towards the company. Hedge fund firms constantly search out bright intellectuals and highly-experienced employees and throw away millions of dollars on satellite photos and other research activities, so it is no wonder why they tend to generate millions in profits each year. It is also true that some hedge fund players fail inconceivably on some occasions, but net net their stock picks have been generating superior risk-adjusted returns on average over the years.

QUALCOMM, Incorporated (NASDAQ:QCOM) investors should pay attention to an increase in support from the world’s most elite money managers lately. Our calculations also showed that QCOM isn’t among the 30 most popular stocks among hedge funds (click for Q4 rankings and see the video at the end of this article for Q3 rankings).

We leave no stone unturned when looking for the next great investment idea. For example, this trader is claiming triple digit returns, so we check out his latest trade recommendations. Blockchain technology is about to go mainstream and reach heavy adoption, so we check out this tech investor’s blockchain stock pick. We read hedge fund investor letters and listen to stock pitches at hedge fund conferences (by the way watch this video if you want to hear one of the best healthcare hedge fund manager’s coronavirus analysis). Our best call in 2020 was shorting the market when S&P 500 was trading at 3150 after realizing the coronavirus pandemic’s significance before most investors. With all of this in mind let’s analyze the latest hedge fund action encompassing QUALCOMM, Incorporated (NASDAQ:QCOM).

At the end of the fourth quarter, a total of 67 of the hedge funds tracked by Insider Monkey were long this stock, a change of 12% from the previous quarter. By comparison, 51 hedge funds held shares or bullish call options in QCOM a year ago. With hedgies’ positions undergoing their usual ebb and flow, there exists an “upper tier” of noteworthy hedge fund managers who were boosting their stakes considerably (or already accumulated large positions). 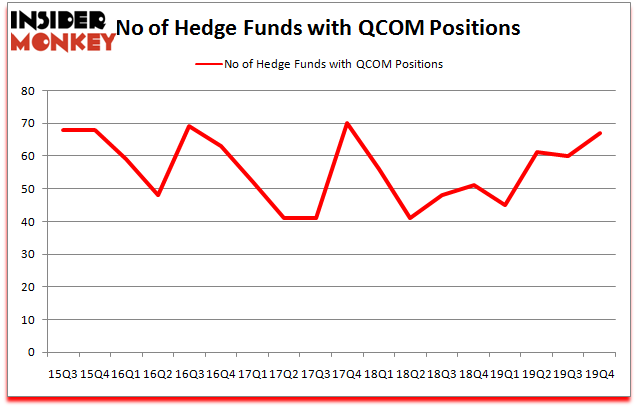 According to Insider Monkey’s hedge fund database, Renaissance Technologies, holds the biggest position in QUALCOMM, Incorporated (NASDAQ:QCOM). Renaissance Technologies has a $507.9 million position in the stock, comprising 0.4% of its 13F portfolio. Coming in second is John Overdeck and David Siegel of Two Sigma Advisors, with a $361.7 million position; the fund has 0.8% of its 13F portfolio invested in the stock. Remaining peers that hold long positions contain Cliff Asness’s AQR Capital Management, David Goel and Paul Ferri’s Matrix Capital Management and Ken Griffin’s Citadel Investment Group. In terms of the portfolio weights assigned to each position Think Investments allocated the biggest weight to QUALCOMM, Incorporated (NASDAQ:QCOM), around 8.59% of its 13F portfolio. Valueworks LLC is also relatively very bullish on the stock, designating 7.29 percent of its 13F equity portfolio to QCOM.

With a general bullishness amongst the heavyweights, specific money managers have been driving this bullishness. GQG Partners, managed by Rajiv Jain, assembled the largest position in QUALCOMM, Incorporated (NASDAQ:QCOM). GQG Partners had $93.5 million invested in the company at the end of the quarter. Lei Zhang’s Hillhouse Capital Management also initiated a $17.6 million position during the quarter. The following funds were also among the new QCOM investors: Michael Rockefeller and Karl Kroeker’s Woodline Partners, David Fiszel’s Honeycomb Asset Management, and Frank Brosens’s Taconic Capital.

As you can see these stocks had an average of 33 hedge funds with bullish positions and the average amount invested in these stocks was $2368 million. That figure was $3091 million in QCOM’s case. General Electric Company (NYSE:GE) is the most popular stock in this table. On the other hand British American Tobacco plc (NYSE:BTI) is the least popular one with only 9 bullish hedge fund positions. Compared to these stocks QUALCOMM, Incorporated (NASDAQ:QCOM) is more popular among hedge funds. Our calculations showed that top 10 most popular stocks among hedge funds returned 41.4% in 2019 and outperformed the S&P 500 ETF (SPY) by 10.1 percentage points. These stocks lost 1.0% in 2020 through April 20th and still beat the market by 11 percentage points. Unfortunately QCOM wasn’t nearly as popular as these 10 stocks and hedge funds that were betting on QCOM were disappointed as the stock returned -15.1% during the three months of 2020 (through April 20th) and underperformed the market. If you are interested in investing in large cap stocks with huge upside potential, you should check out the top 10 most popular stocks among hedge funds as most of these stocks already outperformed the market in 2020.