Were Hedge Funds Right About Piling Into RH (RH)?

Is RH (NYSE:RH) a good equity to bet on right now? We like to check what the smart money thinks first before doing extensive research on a given stock. Although there have been several high profile failed hedge fund picks, the consensus picks among hedge fund investors have historically outperformed the market after adjusting for known risk attributes. It’s not surprising given that hedge funds have access to better information and more resources to predict the winners in the stock market.

RH (NYSE:RH) investors should pay attention to a decrease in support from the world’s most elite money managers lately. RH was in 28 hedge funds’ portfolios at the end of the second quarter of 2019. There were 36 hedge funds in our database with RH positions at the end of the previous quarter. Even though our calculations also showed that RH isn’t among the 30 most popular stocks among hedge funds (see the video below), overall hedge fund sentiment towards RH is till very bullish compared to its peers.

According to most stock holders, hedge funds are seen as underperforming, old financial tools of yesteryear. While there are more than 8000 funds in operation at the moment, We choose to focus on the bigwigs of this group, about 750 funds. It is estimated that this group of investors command bulk of all hedge funds’ total capital, and by keeping an eye on their best equity investments, Insider Monkey has formulated numerous investment strategies that have historically outperformed the S&P 500 index. Insider Monkey’s flagship hedge fund strategy defeated the S&P 500 index by around 5 percentage points per annum since its inception in May 2014. We were able to generate large returns even by identifying short candidates. Our portfolio of short stocks lost 25.7% since February 2017 (through September 30th) even though the market was up more than 33% during the same period. We just shared a list of 10 short targets in our latest quarterly update . 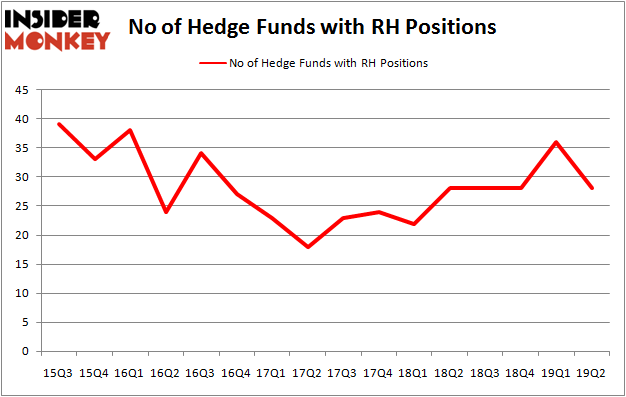 Since RH (NYSE:RH) has experienced bearish sentiment from hedge fund managers, it’s easy to see that there was a specific group of fund managers that decided to sell off their full holdings in the second quarter. Intriguingly, D. E. Shaw’s D E Shaw said goodbye to the biggest position of the “upper crust” of funds monitored by Insider Monkey, comprising an estimated $46 million in stock, and Anand Parekh’s Alyeska Investment Group was right behind this move, as the fund said goodbye to about $29.7 million worth. These moves are important to note, as total hedge fund interest was cut by 8 funds in the second quarter.

Let’s now take a look at hedge fund activity in other stocks – not necessarily in the same industry as RH (NYSE:RH) but similarly valued. We will take a look at Seaspan Corporation (NYSE:SSW), Sprouts Farmers Market Inc (NASDAQ:SFM), Belden Inc. (NYSE:BDC), and Granite Construction Incorporated (NYSE:GVA). All of these stocks’ market caps resemble RH’s market cap.

As you can see these stocks had an average of 13.75 hedge funds with bullish positions and the average amount invested in these stocks was $297 million. That figure was $392 million in RH’s case. Sprouts Farmers Market Inc (NASDAQ:SFM) is the most popular stock in this table. On the other hand Seaspan Corporation (NYSE:SSW) is the least popular one with only 7 bullish hedge fund positions. Compared to these stocks RH (NYSE:RH) is more popular among hedge funds. Our calculations showed that top 20 most popular stocks among hedge funds returned 24.4% in 2019 through September 30th and outperformed the S&P 500 ETF (SPY) by 4 percentage points. Hedge funds were also right about betting on RH as the stock returned 47.8% during Q3 and outperformed the market by an even larger margin. Hedge funds were clearly right about piling into this stock relative to other stocks with similar market capitalizations.