Were Hedge Funds Right About Piling Into Qiagen NV (QGEN)?

The Insider Monkey team has completed processing the quarterly 13F filings for the June quarter submitted by the hedge funds and other money managers included in our extensive database. Most hedge fund investors experienced strong gains on the back of a strong market performance, which certainly propelled them to adjust their equity holdings so as to maintain the desired risk profile. As a result, the relevancy of these public filings and their content is indisputable, as they may reveal numerous high-potential stocks. The following article will discuss the smart money sentiment towards Qiagen NV (NYSE:QGEN).

Qiagen NV (NYSE:QGEN) has seen an increase in support from the world’s most elite money managers of late. Our calculations also showed that QGEN isn’t among the 30 most popular stocks among hedge funds (see the video below). 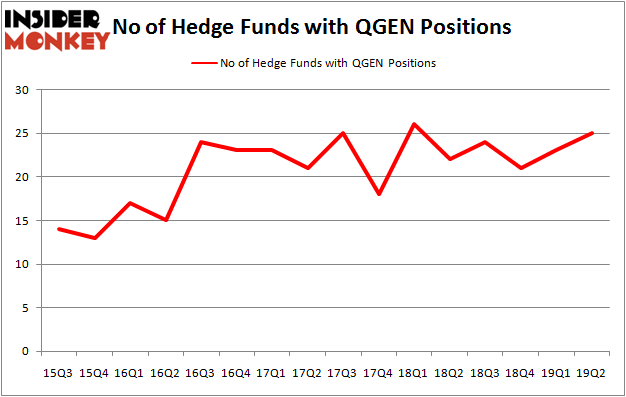 Unlike this former hedge fund manager who is convinced Dow will soar past 40000, our long-short investment strategy doesn’t rely on bull markets to deliver double digit returns. We only rely on hedge fund buy/sell signals. Let’s take a peek at the recent hedge fund action surrounding Qiagen NV (NYSE:QGEN).

Heading into the third quarter of 2019, a total of 25 of the hedge funds tracked by Insider Monkey were bullish on this stock, a change of 9% from the previous quarter. By comparison, 22 hedge funds held shares or bullish call options in QGEN a year ago. With hedge funds’ capital changing hands, there exists an “upper tier” of noteworthy hedge fund managers who were increasing their stakes significantly (or already accumulated large positions).

Among these funds, AQR Capital Management held the most valuable stake in Qiagen NV (NYSE:QGEN), which was worth $94.5 million at the end of the second quarter. On the second spot was D E Shaw which amassed $89 million worth of shares. Moreover, Marshall Wace LLP, Winton Capital Management, and Two Sigma Advisors were also bullish on Qiagen NV (NYSE:QGEN), allocating a large percentage of their portfolios to this stock.

Now, key money managers were breaking ground themselves. Polar Capital, managed by Brian Ashford-Russell and Tim Woolley, assembled the biggest position in Qiagen NV (NYSE:QGEN). Polar Capital had $6.7 million invested in the company at the end of the quarter. Benjamin A. Smith’s Laurion Capital Management also initiated a $2.8 million position during the quarter. The other funds with new positions in the stock are Michael Kharitonov and Jon David McAuliffe’s Voleon Capital, Steve Cohen’s Point72 Asset Management, and Nick Niell’s Arrowgrass Capital Partners.

As you can see these stocks had an average of 24.75 hedge funds with bullish positions and the average amount invested in these stocks was $529 million. That figure was $303 million in QGEN’s case. Black Knight, Inc. (NYSE:BKI) is the most popular stock in this table. On the other hand MGM Growth Properties LLC (NYSE:MGP) is the least popular one with only 14 bullish hedge fund positions. Qiagen NV (NYSE:QGEN) is not the most popular stock in this group but hedge fund interest is still above average. This is a slightly positive signal but we’d rather spend our time researching stocks that hedge funds are piling on. Our calculations showed that top 20 most popular stocks among hedge funds returned 24.4% in 2019 through September 30th and outperformed the S&P 500 ETF (SPY) by 4 percentage points. Unfortunately QGEN wasn’t nearly as popular as these 20 stocks and hedge funds that were betting on QGEN were disappointed as the stock returned -18.7% during the third quarter and underperformed the market. If you are interested in investing in large cap stocks with huge upside potential, you should check out the top 20 most popular stocks among hedge funds as many of these stocks already outperformed the market so far this year.