We at Insider Monkey have gone over 730 13F filings that hedge funds and prominent investors are required to file by the SEC The 13F filings show the funds’ and investors’ portfolio positions as of June 28th. In this article, we look at what those funds think of Northrop Grumman Corporation (NYSE:NOC) based on that data.

Northrop Grumman Corporation (NYSE:NOC) investors should be aware of an increase in hedge fund sentiment recently. NOC was in 37 hedge funds’ portfolios at the end of June. There were 35 hedge funds in our database with NOC positions at the end of the previous quarter. Our calculations also showed that NOC isn’t among the 30 most popular stocks among hedge funds (see the video at the end of this article).

Unlike some fund managers who are betting on Dow reaching 40000 in a year, our long-short investment strategy doesn’t rely on bull markets to deliver double digit returns. We only rely on hedge fund buy/sell signals. Let’s take a peek at the latest hedge fund action encompassing Northrop Grumman Corporation (NYSE:NOC).

How have hedgies been trading Northrop Grumman Corporation (NYSE:NOC)?

Heading into the third quarter of 2019, a total of 37 of the hedge funds tracked by Insider Monkey held long positions in this stock, a change of 6% from the previous quarter. Below, you can check out the change in hedge fund sentiment towards NOC over the last 16 quarters. So, let’s examine which hedge funds were among the top holders of the stock and which hedge funds were making big moves. 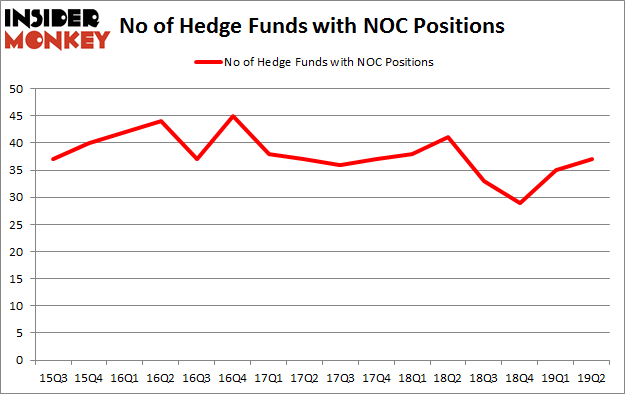 With a general bullishness amongst the heavyweights, some big names were leading the bulls’ herd. Suvretta Capital Management, managed by Aaron Cowen, established the largest position in Northrop Grumman Corporation (NYSE:NOC). Suvretta Capital Management had $73.9 million invested in the company at the end of the quarter. Louis Bacon’s Moore Global Investments also initiated a $32.5 million position during the quarter. The other funds with brand new NOC positions are Zach Schreiber’s Point State Capital, Nick Niell’s Arrowgrass Capital Partners, and Gregg Moskowitz’s Interval Partners.

Let’s go over hedge fund activity in other stocks – not necessarily in the same industry as Northrop Grumman Corporation (NYSE:NOC) but similarly valued. We will take a look at Zoetis Inc (NYSE:ZTS), Illumina, Inc. (NASDAQ:ILMN), Schlumberger Limited (NYSE:SLB), and The Charles Schwab Corporation (NYSE:SCHW). All of these stocks’ market caps are similar to NOC’s market cap.

As you can see these stocks had an average of 43 hedge funds with bullish positions and the average amount invested in these stocks was $1991 million. That figure was $600 million in NOC’s case. The Charles Schwab Corporation (NYSE:SCHW) is the most popular stock in this table. On the other hand Zoetis Inc (NYSE:ZTS) is the least popular one with only 40 bullish hedge fund positions. Compared to these stocks Northrop Grumman Corporation (NYSE:NOC) is even less popular than ZTS. Hedge funds clearly dropped the ball on NOC as the stock delivered strong returns, though hedge funds’ consensus picks still generated respectable returns. Our calculations showed that top 20 most popular stocks among hedge funds returned 24.4% in 2019 through September 30th and outperformed the S&P 500 ETF (SPY) by 4 percentage points. Hedge funds were also right about betting on NOC as the stock returned 16.4% during the third quarter and outperformed the market by an even larger margin.