Hedge Funds and other institutional investors have just completed filing their 13Fs with the Securities and Exchange Commission, revealing their equity portfolios as of the end of June. At Insider Monkey, we follow nearly 750 active hedge funds and notable investors and by analyzing their 13F filings, we can determine the stocks that they are collectively bullish on. One of their picks is Lowe’s Companies, Inc. (NYSE:LOW), so let’s take a closer look at the sentiment that surrounds it in the current quarter.

Lowe’s Companies, Inc. (NYSE:LOW) was in 63 hedge funds’ portfolios at the end of June. LOW investors should pay attention to an increase in hedge fund sentiment in recent months. There were 56 hedge funds in our database with LOW holdings at the end of the previous quarter. Our calculations also showed that LOW isn’t among the 30 most popular stocks among hedge funds (see the video below).

Unlike some fund managers who are betting on Dow reaching 40000 in a year, our long-short investment strategy doesn’t rely on bull markets to deliver double digit returns. We only rely on hedge fund buy/sell signals. We’re going to take a look at the recent hedge fund action encompassing Lowe’s Companies, Inc. (NYSE:LOW).

At the end of the second quarter, a total of 63 of the hedge funds tracked by Insider Monkey were bullish on this stock, a change of 13% from one quarter earlier. The graph below displays the number of hedge funds with bullish position in LOW over the last 16 quarters. With hedgies’ capital changing hands, there exists a few noteworthy hedge fund managers who were upping their holdings considerably (or already accumulated large positions). 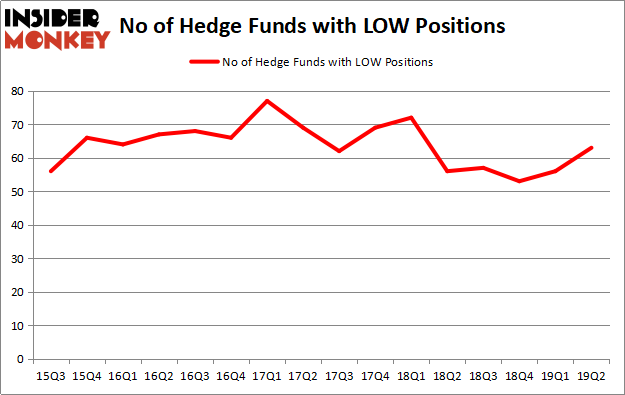 More specifically, Pershing Square was the largest shareholder of Lowe’s Companies, Inc. (NYSE:LOW), with a stake worth $898.2 million reported as of the end of March. Trailing Pershing Square was D E Shaw, which amassed a stake valued at $761.9 million. Citadel Investment Group, OZ Management, and Maverick Capital were also very fond of the stock, giving the stock large weights in their portfolios.

Consequently, key money managers were breaking ground themselves. OZ Management assembled the most outsized call position in Lowe’s Companies, Inc. (NYSE:LOW). OZ Management had $230 million invested in the company at the end of the quarter. Andrew Immerman and Jeremy Schiffman’s Palestra Capital Management also made a $149.3 million investment in the stock during the quarter. The other funds with brand new LOW positions are Andreas Halvorsen’s Viking Global, John Overdeck and David Siegel’s Two Sigma Advisors, and Steven Boyd’s Armistice Capital.

As you can see these stocks had an average of 34 hedge funds with bullish positions and the average amount invested in these stocks was $1749 million. That figure was $4104 million in LOW’s case. Mondelez International Inc (NASDAQ:MDLZ) is the most popular stock in this table. On the other hand Banco Bradesco SA (NYSE:BBD) is the least popular one with only 14 bullish hedge fund positions. Compared to these stocks Lowe’s Companies, Inc. (NYSE:LOW) is more popular among hedge funds. Our calculations showed that top 20 most popular stocks among hedge funds returned 24.4% in 2019 through September 30th and outperformed the S&P 500 ETF (SPY) by 4 percentage points. Hedge funds were also right about betting on LOW as the stock returned 9.6% during Q3 and outperformed the market by an even larger margin. Hedge funds were clearly right about piling into this stock relative to other stocks with similar market capitalizations.