Is Chipotle Mexican Grill, Inc. (NYSE:CMG) a good stock to buy right now? We at Insider Monkey like to examine what billionaires and hedge funds think of a company before spending days of research on it. Given their 2 and 20 payment structure, hedge funds have more incentives and resources than the average investor. The funds have access to expert networks and get tips from industry insiders. They also have numerous Ivy League graduates and MBAs. Like everyone else, hedge funds perform miserably at times, but their consensus picks have historically outperformed the market after risk adjustments.

Is Chipotle Mexican Grill, Inc. (NYSE:CMG) a cheap stock to buy now? Hedge funds are in a bullish mood. The number of bullish hedge fund positions increased by 2 recently. Our calculations also showed that CMG isn’t among the 30 most popular stocks among hedge funds.

Unlike some fund managers who are betting on Dow reaching 40000 in a year, our long-short investment strategy doesn’t rely on bull markets to deliver double digit returns. We only rely on hedge fund buy/sell signals. We’re going to take a look at the fresh hedge fund action surrounding Chipotle Mexican Grill, Inc. (NYSE:CMG).

At Q2’s end, a total of 37 of the hedge funds tracked by Insider Monkey were long this stock, a change of 6% from one quarter earlier. By comparison, 39 hedge funds held shares or bullish call options in CMG a year ago. With the smart money’s sentiment swirling, there exists an “upper tier” of key hedge fund managers who were adding to their stakes substantially (or already accumulated large positions). 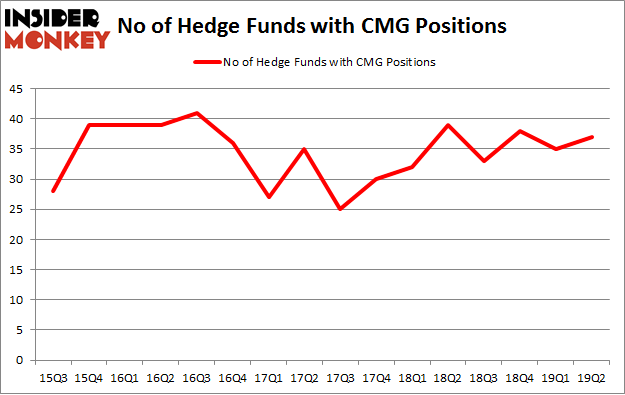 When looking at the institutional investors followed by Insider Monkey, Renaissance Technologies holds the largest position in Chipotle Mexican Grill, Inc. (NYSE:CMG). Renaissance Technologies has a $1.313 billion position in the stock, comprising 1.2% of its 13F portfolio. The second most bullish fund manager is Pershing Square, led by Bill Ackman, holding a $1.3065 billion position; 19.5% of its 13F portfolio is allocated to the company. Other peers that hold long positions encompass Ken Griffin’s Citadel Investment Group, and Panayotis Takis Sparaggis’s Alkeon Capital Management.

With a general bullishness amongst the heavyweights, key hedge funds were breaking ground themselves. Navellier & Associates, managed by Louis Navellier, established the most valuable position in Chipotle Mexican Grill, Inc. (NYSE:CMG). Navellier & Associates had $6.3 million invested in the company at the end of the quarter. Paul Tudor Jones’s Tudor Investment Corp also made a $6.3 million investment in the stock during the quarter. The other funds with brand new CMG positions are Gavin Saitowitz and Cisco J. del Valle’s Springbok Capital, Matthew Hulsizer’s PEAK6 Capital Management, and Ben Levine, Andrew Manuel and Stefan Renold’s LMR Partners.

As you can see these stocks had an average of 37 hedge funds with bullish positions and the average amount invested in these stocks was $1373 million. That figure was $3383 million in CMG’s case. Ulta Beauty, Inc. (NASDAQ:ULTA) is the most popular stock in this table. On the other hand Northern Trust Corporation (NASDAQ:NTRS) is the least popular one with only 29 bullish hedge fund positions. Chipotle Mexican Grill, Inc. (NYSE:CMG) is not the least popular stock in this group but hedge fund interest is still below average. Our calculations showed that top 20 most popular stocks (see the video below) among hedge funds returned 24.4% in 2019 through September 30th and outperformed the S&P 500 ETF (SPY) by 4 percentage points. A small number of hedge funds were also right about betting on CMG as the stock returned 14.7% during the same time frame and outperformed the market by an even larger margin.