In these volatile markets we scrutinize hedge fund filings to get a reading on which direction each stock might be going. The 800+ hedge funds and famous money managers tracked by Insider Monkey have already compiled and submitted their 13F filings for the fourth quarter, which unveil their equity positions as of December 31. We went through these filings, fixed typos and other more significant errors and identified the changes in hedge fund portfolios. Our extensive review of these public filings is finally over, so this article is set to reveal the smart money sentiment towards Merck & Co., Inc. (NYSE:MRK).

Is Merck & Co., Inc. (NYSE:MRK) ready to rally soon? Money managers are turning less bullish. The number of long hedge fund positions dropped by 3 lately. Our calculations also showed that MRK isn’t among the 30 most popular stocks among hedge funds (click for Q4 rankings and see the video at the end of this article for Q3 rankings).

We leave no stone unturned when looking for the next great investment idea. For example, this trader is claiming triple digit returns, so we check out his latest trade recommendations. We read hedge fund investor letters and listen to stock pitches at hedge fund conferences (by the way watch this video if you want to hear one of the best healthcare hedge fund manager’s coronavirus analysis). Our best call in 2020 was shorting the market when S&P 500 was trading at 3150 after realizing the coronavirus pandemic’s significance before most investors. With all of this in mind let’s take a peek at the latest hedge fund action encompassing Merck & Co., Inc. (NYSE:MRK).

At the end of the fourth quarter, a total of 77 of the hedge funds tracked by Insider Monkey were bullish on this stock, a change of -4% from one quarter earlier. By comparison, 68 hedge funds held shares or bullish call options in MRK a year ago. With the smart money’s capital changing hands, there exists an “upper tier” of notable hedge fund managers who were adding to their holdings substantially (or already accumulated large positions). 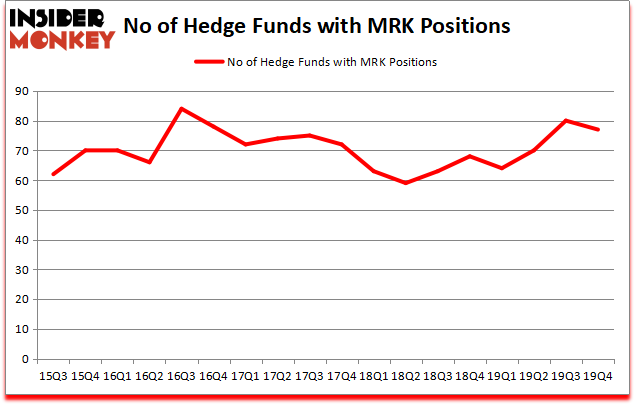 Of the funds tracked by Insider Monkey, Arrowstreet Capital, managed by Peter Rathjens, Bruce Clarke and John Campbell, holds the largest position in Merck & Co., Inc. (NYSE:MRK). Arrowstreet Capital has a $928.5 million position in the stock, comprising 2.2% of its 13F portfolio. The second largest stake is held by Fisher Asset Management, managed by Ken Fisher, which holds a $808.5 million position; 0.8% of its 13F portfolio is allocated to the company. Remaining professional money managers with similar optimism comprise Cliff Asness’s AQR Capital Management, Renaissance Technologies and John Overdeck and David Siegel’s Two Sigma Advisors. In terms of the portfolio weights assigned to each position Kahn Brothers allocated the biggest weight to Merck & Co., Inc. (NYSE:MRK), around 11.45% of its 13F portfolio. Parkman Healthcare Partners is also relatively very bullish on the stock, earmarking 5.78 percent of its 13F equity portfolio to MRK.

Seeing as Merck & Co., Inc. (NYSE:MRK) has experienced falling interest from the entirety of the hedge funds we track, we can see that there were a few fund managers that decided to sell off their entire stakes heading into Q4. It’s worth mentioning that Jacob Mitchell’s Antipodes Partners dropped the largest investment of the 750 funds monitored by Insider Monkey, totaling about $148.9 million in stock. Ernest Chow and Jonathan Howe’s fund, Sensato Capital Management, also dumped its stock, about $12.1 million worth. These bearish behaviors are intriguing to say the least, as total hedge fund interest was cut by 3 funds heading into Q4.

As you can see these stocks had an average of 54.5 hedge funds with bullish positions and the average amount invested in these stocks was $8291 million. That figure was $5164 million in MRK’s case. Wells Fargo & Company (NYSE:WFC) is the most popular stock in this table. On the other hand Novartis AG (NYSE:NVS) is the least popular one with only 30 bullish hedge fund positions. Merck & Co., Inc. (NYSE:MRK) is not the most popular stock in this group but hedge fund interest is still above average. Our calculations showed that top 10 most popular stocks among hedge funds returned 41.4% in 2019 and outperformed the S&P 500 ETF (SPY) by 10.1 percentage points. These stocks lost 1.0% in 2020 through April 20th but still beat the market by 11 percentage points. Hedge funds were also right about betting on MRK, though not to the same extent, as the stock returned -7.9% during the first four months of 2020 (through April 20th) and outperformed the market as well.