The market has been volatile in the fourth quarter as the Federal Reserve continued its rate hikes to normalize the interest rates. Small cap stocks have been hit hard as a result, as the Russell 2000 ETF (IWM) has underperformed the larger S&P 500 ETF (SPY) by nearly 7 percentage points. SEC filings and hedge fund investor letters indicate that the smart money seems to be paring back their overall long exposure since summer months, and the funds’ movements is one of the reasons why the major indexes have retraced. In this article, we analyze what the smart money thinks of Magna International Inc. (NYSE:MGA) and find out how it is affected by hedge funds’ moves.

Is Magna International Inc. (NYSE:MGA) undervalued? The best stock pickers are taking a bullish view. The number of long hedge fund positions inched up by 2 in recent months. Our calculations also showed that MGA isn’t among the 30 most popular stocks among hedge funds.

At the moment there are plenty of tools market participants have at their disposal to evaluate publicly traded companies. A couple of the less known tools are hedge fund and insider trading interest. We have shown that, historically, those who follow the best picks of the top hedge fund managers can outperform the broader indices by a superb amount (see the details here).

What does the smart money think about Magna International Inc. (NYSE:MGA)?

Heading into the first quarter of 2019, a total of 22 of the hedge funds tracked by Insider Monkey held long positions in this stock, a change of 10% from the previous quarter. Below, you can check out the change in hedge fund sentiment towards MGA over the last 14 quarters. So, let’s review which hedge funds were among the top holders of the stock and which hedge funds were making big moves. 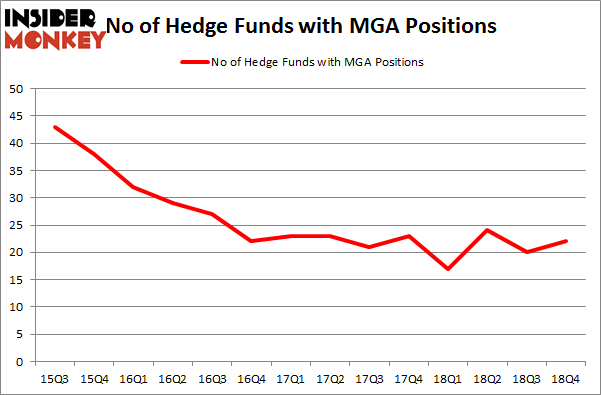 Of the funds tracked by Insider Monkey, Cliff Asness’s AQR Capital Management has the largest position in Magna International Inc. (NYSE:MGA), worth close to $149.7 million, corresponding to 0.2% of its total 13F portfolio. The second most bullish fund manager is East Side Capital (RR Partners), managed by Steven Richman, which holds a $46.9 million position; 6% of its 13F portfolio is allocated to the company. Some other hedge funds and institutional investors with similar optimism comprise D. E. Shaw’s D E Shaw, John Overdeck and David Siegel’s Two Sigma Advisors and Steve Cohen’s Point72 Asset Management.

As you can see these stocks had an average of 31.25 hedge funds with bullish positions and the average amount invested in these stocks was $994 million. That figure was $284 million in MGA’s case. BioMarin Pharmaceutical Inc. (NASDAQ:BMRN) is the most popular stock in this table. On the other hand TAL Education Group, Inc. (NYSE:TAL) is the least popular one with only 24 bullish hedge fund positions. Compared to these stocks Magna International Inc. (NYSE:MGA) is even less popular than TAL. Considering that hedge funds aren’t fond of this stock in relation to other companies analyzed in this article, it may be a good idea to analyze it in detail and understand why the smart money isn’t behind this stock. This isn’t necessarily bad news. Although it is possible that hedge funds may think the stock is overpriced and view the stock as a short candidate, they may not be very familiar with the bullish thesis. In either case more research is warranted. Our calculations showed that top 15 most popular stocks among hedge funds returned 19.7% through March 15th and outperformed the S&P 500 ETF (SPY) by 6.6 percentage points. Unfortunately MGA wasn’t in this group. Hedge funds that bet on MGA were disappointed as the stock returned 8.3% and underperformed the market. If you are interested in investing in large cap stocks, you should check out the top 15 hedge fund stocks as 13 of these outperformed the market.