In these volatile markets we scrutinize hedge fund filings to get a reading on which direction each stock might be going. A whopping number of 13F filings filed with U.S. Securities and Exchange Commission has been processed by Insider Monkey so that individual investors can look at the overall hedge fund sentiment towards the stocks included in their watchlists. These freshly-submitted public filings disclose money managers’ equity positions as of the end of the three-month period that ended December 31, so let’s proceed with the discussion of the hedge fund sentiment on International Business Machines Corp. (NYSE:IBM).

International Business Machines Corp. (NYSE:IBM) has experienced an increase in enthusiasm from smart money lately. IBM was in 50 hedge funds’ portfolios at the end of December. There were 45 hedge funds in our database with IBM positions at the end of the previous quarter. Our calculations also showed that IBM isn’t among the 30 most popular stocks among hedge funds (click for Q4 rankings and see the video at the end of this article for Q3 rankings).

With all of this in mind let’s analyze the recent hedge fund action regarding International Business Machines Corp. (NYSE:IBM).

Heading into the first quarter of 2020, a total of 50 of the hedge funds tracked by Insider Monkey were bullish on this stock, a change of 11% from the previous quarter. The graph below displays the number of hedge funds with bullish position in IBM over the last 18 quarters. With hedge funds’ capital changing hands, there exists a select group of noteworthy hedge fund managers who were increasing their stakes meaningfully (or already accumulated large positions). 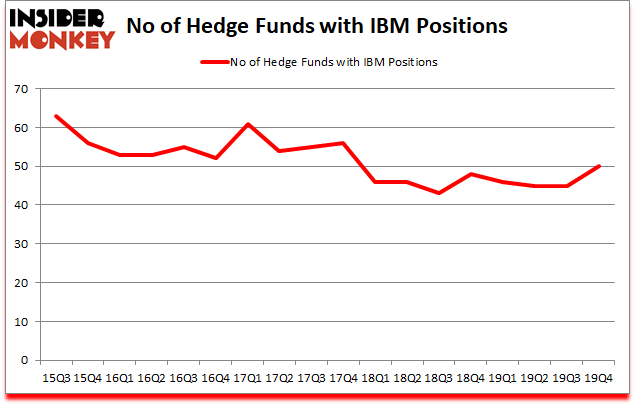 According to Insider Monkey’s hedge fund database, Cliff Asness’s AQR Capital Management has the largest position in International Business Machines Corp. (NYSE:IBM), worth close to $389.7 million, amounting to 0.4% of its total 13F portfolio. Coming in second is Arrowstreet Capital, managed by Peter Rathjens, Bruce Clarke and John Campbell, which holds a $302 million position; the fund has 0.7% of its 13F portfolio invested in the stock. Other members of the smart money with similar optimism include Renaissance Technologies, and Phill Gross and Robert Atchinson’s Adage Capital Management. In terms of the portfolio weights assigned to each position Beddow Capital Management allocated the biggest weight to International Business Machines Corp. (NYSE:IBM), around 4.7% of its 13F portfolio. Levin Capital Strategies is also relatively very bullish on the stock, designating 2.41 percent of its 13F equity portfolio to IBM.

As you can see these stocks had an average of 39.5 hedge funds with bullish positions and the average amount invested in these stocks was $2150 million. That figure was $1289 million in IBM’s case. Linde plc (NYSE:LIN) is the most popular stock in this table. On the other hand GlaxoSmithKline plc (NYSE:GSK) is the least popular one with only 26 bullish hedge fund positions. Compared to these stocks International Business Machines Corp. (NYSE:IBM) is more popular among hedge funds. Our calculations showed that top 10 most popular stocks among hedge funds returned 41.4% in 2019 and outperformed the S&P 500 ETF (SPY) by 10.1 percentage points. These stocks gained 1.3% in 2020 through May 1st but still managed to beat the market by 12.9 percentage points. Hedge funds were also right about betting on IBM, though not to the same extent, as the stock returned -8.1% in 2020 (through May 1st) and outperformed the market as well.