Were Hedge Funds Right About Going After Tesla Inc. (TSLA) ?

Insider Monkey finished processing more than 700 13F filings submitted by hedge funds and prominent investors. These filings show these funds’ portfolio positions as of December 31st, 2018. In this article we are going to take a look at smart money sentiment towards Tesla Inc. (NASDAQ:TSLA).

Tesla Inc. (NASDAQ:TSLA) shareholders have witnessed an increase in enthusiasm from smart money of late. TSLA was in 47 hedge funds’ portfolios at the end of the fourth quarter of 2018. There were 31 hedge funds in our database with TSLA positions at the end of the previous quarter. Our calculations also showed that TSLA isn’t among the 30 most popular stocks among hedge funds.

How have hedgies been trading Tesla Inc. (NASDAQ:TSLA)? 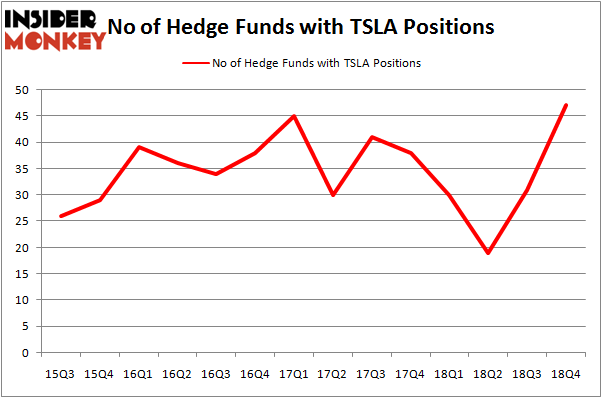 Among these funds, Citadel Investment Group held the most valuable stake in Tesla Inc. (NASDAQ:TSLA), which was worth $1618.4 million at the end of the third quarter. On the second spot was PEAK6 Capital Management which amassed $264.3 million worth of shares. Moreover, Millennium Management, Masters Capital Management, and D E Shaw were also bullish on Tesla Inc. (NASDAQ:TSLA), allocating a large percentage of their portfolios to this stock.

Let’s now review hedge fund activity in other stocks – not necessarily in the same industry as Tesla Inc. (NASDAQ:TSLA) but similarly valued. These stocks are VMware, Inc. (NYSE:VMW), The Charles Schwab Corporation (NYSE:SCHW), Baidu, Inc. (NASDAQ:BIDU), and The TJX Companies, Inc. (NYSE:TJX). All of these stocks’ market caps are closest to TSLA’s market cap.

As you can see these stocks had an average of 46.75 hedge funds with bullish positions and the average amount invested in these stocks was $2734 million. That figure was $879 million in TSLA’s case. The TJX Companies, Inc. (NYSE:TJX) is the most popular stock in this table. On the other hand VMware, Inc. (NYSE:VMW) is the least popular one with only 32 bullish hedge fund positions. Tesla Inc. (NASDAQ:TSLA) is not the most popular stock in this group but hedge fund interest is still above average. This is a slightly positive signal but we’d rather spend our time researching stocks that hedge funds are piling on. Our calculations showed that top 15 most popular stocks among hedge funds returned 19.7% through March 15th and outperformed the S&P 500 ETF (SPY) by 6.6 percentage points. Unfortunately TSLA wasn’t in this group. Hedge funds that bet on TSLA were disappointed as the stock lost 17.2% and underperformed the market. If you are interested in investing in large cap stocks, you should check out the top 15 hedge fund stocks as 13 of these outperformed the market.