In these volatile markets we scrutinize hedge fund filings to get a reading on which direction each stock might be going. The Insider Monkey team has completed processing the quarterly 13F filings for the December quarter submitted by the hedge funds and other money managers included in our extensive database. Most hedge fund investors experienced strong gains on the back of a strong market performance, which certainly propelled them to adjust their equity holdings so as to maintain the desired risk profile. As a result, the relevancy of these public filings and their content is indisputable, as they may reveal numerous high-potential stocks. The following article will discuss the smart money sentiment towards General Motors Company (NYSE:GM).

In today’s marketplace there are a multitude of tools shareholders employ to size up publicly traded companies. Two of the less utilized tools are hedge fund and insider trading moves. Our researchers have shown that, historically, those who follow the best picks of the top investment managers can outperform the broader indices by a significant amount (see the details here).

We leave no stone unturned when looking for the next great investment idea. For example, this trader is claiming triple digit returns, so we check out his latest trade recommendations. We read hedge fund investor letters and listen to stock pitches at hedge fund conferences (by the way watch this video if you want to hear one of the best healthcare hedge fund manager’s coronavirus analysis). Our best call in 2020 was shorting the market when S&P 500 was trading at 3150 after realizing the coronavirus pandemic’s significance before most investors. Keeping this in mind let’s take a glance at the key hedge fund action regarding General Motors Company (NYSE:GM). 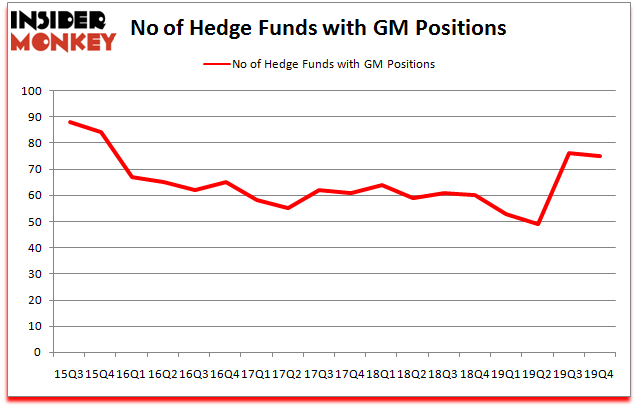 According to publicly available hedge fund and institutional investor holdings data compiled by Insider Monkey, Warren Buffett’s Berkshire Hathaway has the most valuable position in General Motors Company (NYSE:GM), worth close to $2.745 billion, amounting to 1.1% of its total 13F portfolio. The second most bullish fund manager is Greenhaven Associates, led by Edgar Wachenheim, holding a $731.3 million position; the fund has 16.3% of its 13F portfolio invested in the stock. Some other hedge funds and institutional investors with similar optimism encompass Boykin Curry’s Eagle Capital Management, Ken Griffin’s Citadel Investment Group and David Einhorn’s Greenlight Capital. In terms of the portfolio weights assigned to each position Greenlight Capital allocated the biggest weight to General Motors Company (NYSE:GM), around 16.71% of its 13F portfolio. Greenhaven Associates is also relatively very bullish on the stock, setting aside 16.31 percent of its 13F equity portfolio to GM.

Judging by the fact that General Motors Company (NYSE:GM) has experienced bearish sentiment from the entirety of the hedge funds we track, we can see that there were a few funds who sold off their positions entirely in the third quarter. It’s worth mentioning that Anand Parekh’s Alyeska Investment Group cut the largest position of the 750 funds followed by Insider Monkey, valued at close to $53.5 million in stock, and Josh Donfeld and David Rogers’s Castle Hook Partners was right behind this move, as the fund dropped about $35.2 million worth. These transactions are interesting, as aggregate hedge fund interest dropped by 1 funds in the third quarter.

As you can see these stocks had an average of 36.5 hedge funds with bullish positions and the average amount invested in these stocks was $741 million. That figure was $6532 million in GM’s case. Air Products & Chemicals, Inc. (NYSE:APD) is the most popular stock in this table. On the other hand America Movil SAB de CV (NYSE:AMX) is the least popular one with only 17 bullish hedge fund positions. Compared to these stocks General Motors Company (NYSE:GM) is more popular among hedge funds. Our calculations showed that top 10 most popular stocks among hedge funds returned 41.4% in 2019 and outperformed the S&P 500 ETF (SPY) by 10.1 percentage points. These stocks lost 1.0% in 2020 through April 20th and still beat the market by 11 percentage points. Unfortunately GM wasn’t nearly as popular as these 10 stocks and hedge funds that were betting on GM were disappointed as the stock returned -38.1% during the three months of 2020 (through April 20th) and underperformed the market. If you are interested in investing in large cap stocks with huge upside potential, you should check out the top 10 most popular stocks among hedge funds as most of these stocks already outperformed the market in 2020.