Were Hedge Funds Right About Flocking Into Zynga Inc (ZNGA) ?

A whopping number of 13F filings filed with U.S. Securities and Exchange Commission has been processed by Insider Monkey so that individual investors can look at the overall hedge fund sentiment towards the stocks included in their watchlists. These freshly-submitted public filings disclose money managers’ equity positions as of the end of the three-month period that ended December 31, so let’s proceed with the discussion of the hedge fund sentiment on Zynga Inc (NASDAQ:ZNGA).

Zynga Inc (NASDAQ:ZNGA) has seen an increase in hedge fund sentiment in recent months. Our calculations also showed that znga isn’t among the 30 most popular stocks among hedge funds.

In today’s marketplace there are dozens of signals shareholders can use to value stocks. A couple of the most underrated signals are hedge fund and insider trading sentiment. Our experts have shown that, historically, those who follow the best picks of the top investment managers can outperform the broader indices by a healthy margin (see the details here).

Heading into the first quarter of 2019, a total of 29 of the hedge funds tracked by Insider Monkey held long positions in this stock, a change of 12% from the previous quarter. By comparison, 20 hedge funds held shares or bullish call options in ZNGA a year ago. With hedgies’ sentiment swirling, there exists an “upper tier” of notable hedge fund managers who were boosting their stakes meaningfully (or already accumulated large positions). 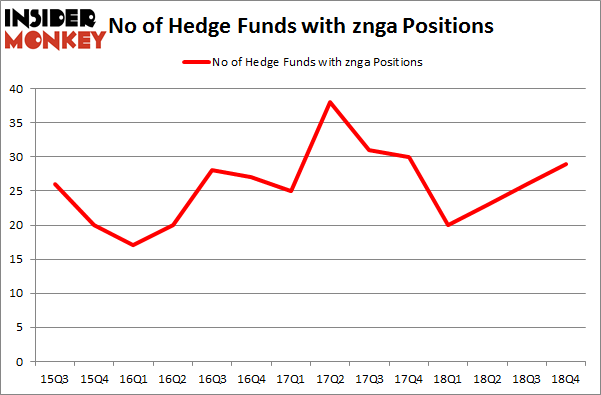 When looking at the institutional investors followed by Insider Monkey, David Cohen and Harold Levy’s Iridian Asset Management has the most valuable position in Zynga Inc (NASDAQ:ZNGA), worth close to $164.9 million, accounting for 2.2% of its total 13F portfolio. Coming in second is Ken Griffin of Citadel Investment Group, with a $111.8 million position; the fund has 0.1% of its 13F portfolio invested in the stock. Some other professional money managers with similar optimism contain Eric Bannasch’s Cadian Capital, D. E. Shaw’s D E Shaw and Seth Wunder’s Black-and-White Capital.

As you can see these stocks had an average of 29 hedge funds with bullish positions and the average amount invested in these stocks was $365 million. That figure was $725 million in ZNGA’s case. Olin Corporation (NYSE:OLN) is the most popular stock in this table. On the other hand EnerSys (NYSE:ENS) is the least popular one with only 22 bullish hedge fund positions. Zynga Inc (NASDAQ:ZNGA) is not the least popular stock in this group but hedge fund interest is still below average. Our calculations showed that top 15 most popular stocks) among hedge funds returned 24.2% through April 22nd and outperformed the S&P 500 ETF (SPY) by more than 7 percentage points. A small number of hedge funds were also right about betting on ZNGA as the stock returned 40.5% and outperformed the market by an even larger margin.