Zayo Group Holdings Inc (NYSE:ZAYO) investors should be aware of an increase in activity from the world’s largest hedge funds of late. Our calculations also showed that ZAYO isn’t among the 30 most popular stocks among hedge funds.

Today there are plenty of indicators shareholders have at their disposal to evaluate their holdings. A duo of the most under-the-radar indicators are hedge fund and insider trading sentiment. We have shown that, historically, those who follow the best picks of the best hedge fund managers can outclass the S&P 500 by a very impressive amount (see the details here). 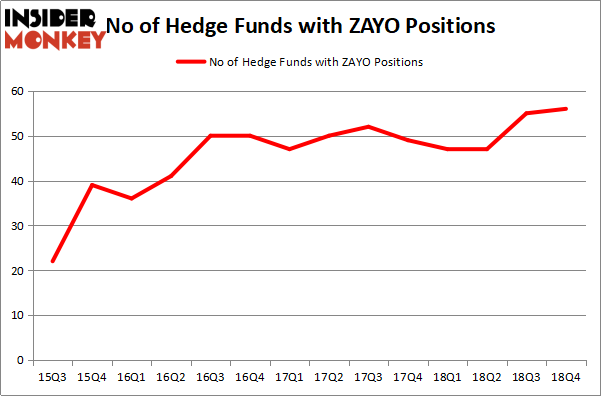 The largest stake in Zayo Group Holdings Inc (NYSE:ZAYO) was held by Senator Investment Group, which reported holding $205.5 million worth of stock at the end of September. It was followed by Citadel Investment Group with a $162.9 million position. Other investors bullish on the company included Kensico Capital, Zimmer Partners, and Hunt Lane Capital.

As you can see these stocks had an average of 21.25 hedge funds with bullish positions and the average amount invested in these stocks was $365 million. That figure was $1248 million in ZAYO’s case. Fortune Brands Home & Security Inc (NYSE:FBHS) is the most popular stock in this table. On the other hand Carlyle Group LP (NASDAQ:CG) is the least popular one with only 10 bullish hedge fund positions. Compared to these stocks Zayo Group Holdings Inc (NYSE:ZAYO) is more popular among hedge funds. Considering that hedge funds are fond of this stock in relation to its market cap peers, it may be a good idea to analyze it in detail and potentially include it in your portfolio. Our calculations showed that top 15 most popular stocks among hedge funds returned 21.3% through April 8th and outperformed the S&P 500 ETF (SPY) by more than 5 percentage points. Hedge funds were also right about betting on ZAYO as the stock returned 29.1% and outperformed the market as well.