Like everyone else, elite investors make mistakes. Some of their top consensus picks, such as Amazon, Facebook and Alibaba, have not done well in Q4 due to various reasons. Nevertheless, the data show elite investors’ consensus picks have done well on average over the long-term. The top 15 S&P 500 stocks among hedge funds at the end of September 2018 returned an average of 1% through March 15th whereas the S&P 500 Index ETF lost 2.2% during the same period. Because their consensus picks have done well, we pay attention to what elite funds think before doing extensive research on a stock. In this article, we take a closer look at Texas Pacific Land Trust (NYSE:TPL) from the perspective of those elite funds.

Texas Pacific Land Trust (NYSE:TPL) has experienced an increase in activity from the world’s largest hedge funds lately. TPL was in 13 hedge funds’ portfolios at the end of the fourth quarter of 2018. There were 11 hedge funds in our database with TPL positions at the end of the previous quarter. Our calculations also showed that TPL isn’t among the 30 most popular stocks among hedge funds.

At the end of the fourth quarter, a total of 13 of the hedge funds tracked by Insider Monkey were bullish on this stock, a change of 18% from one quarter earlier. Below, you can check out the change in hedge fund sentiment towards TPL over the last 14 quarters. So, let’s examine which hedge funds were among the top holders of the stock and which hedge funds were making big moves. 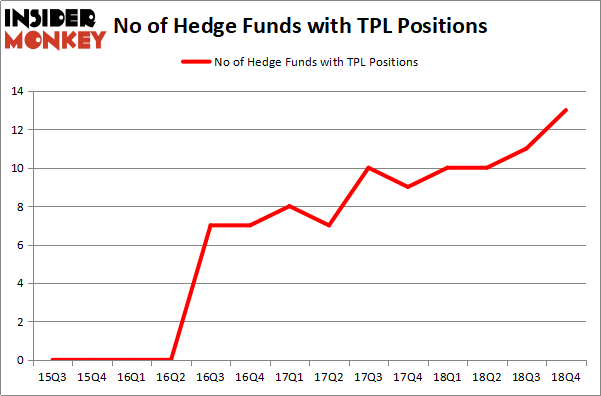 As you can see these stocks had an average of 20.25 hedge funds with bullish positions and the average amount invested in these stocks was $321 million. That figure was $1041 million in TPL’s case. The Howard Hughes Corporation (NYSE:HHC) is the most popular stock in this table. On the other hand Primerica, Inc. (NYSE:PRI) is the least popular one with only 16 bullish hedge fund positions. Compared to these stocks Texas Pacific Land Trust (NYSE:TPL) is even less popular than PRI. Hedge funds clearly dropped the ball on TPL as the stock delivered strong returns, though hedge funds’ consensus picks still generated respectable returns. Our calculations showed that top 15 most popular stocks) among hedge funds returned 24.2% through April 22nd and outperformed the S&P 500 ETF (SPY) by more than 7 percentage points. A small number of hedge funds were also right about betting on TPL as the stock returned 67.4% and outperformed the market by an even larger margin.