What have hedge funds been doing with Tencent Music Entertainment Group (NYSE:TME)? 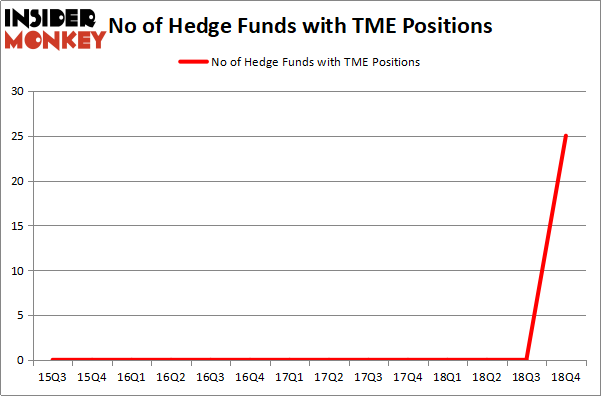 The largest stake in Tencent Music Entertainment Group (NYSE:TME) was held by Tiger Global Management LLC, which reported holding $68.4 million worth of stock at the end of September. It was followed by Alkeon Capital Management with a $66.7 million position. Other investors bullish on the company included Coatue Management, Kingstown Capital Management, and D1 Capital Partners.

Let’s now take a look at hedge fund activity in other stocks – not necessarily in the same industry as Tencent Music Entertainment Group (NYSE:TME) but similarly valued. We will take a look at McKesson Corporation (NYSE:MCK), Xilinx, Inc. (NASDAQ:XLNX), CRH PLC (NYSE:CRH), and Dollar Tree, Inc. (NASDAQ:DLTR). This group of stocks’ market values are similar to TME’s market value.

As you can see these stocks had an average of 38.25 hedge funds with bullish positions and the average amount invested in these stocks was $1332 million. That figure was $317 million in TME’s case. Dollar Tree, Inc. (NASDAQ:DLTR) is the most popular stock in this table. On the other hand CRH PLC (NYSE:CRH) is the least popular one with only 8 bullish hedge fund positions. Tencent Music Entertainment Group (NYSE:TME) is not the least popular stock in this group and hedge fund interest is still below average. Our calculations showed that top 15 most popular stocks among hedge funds returned 19.7% through March 15th and outperformed the S&P 500 ETF (SPY) by 6.6 percentage points. Hedge funds were also right about betting on TME as the stock returned 38.2% and outperformed the market by a large margin as well.

Hedge Funds Dropped The Ball On Fortive Corporation (FTV)
Monthly Newsletter Strategy
Download a free copy of our newsletter and see the details inside!
Hedge Fund Resource Center
Related News
Ten of the Most Common Addictions 13 African Countries with the Largest White Population in 2018 6 Causes of Human Trafficking in Africa, India, and US
Billionaire Hedge Funds