“Market conditions are changing. The continued rise in interest rates suggests we are in the early stages of a bond bear market, which could intensify as central banks withdraw liquidity. The receding tide of liquidity will start to reveal more rocks beyond what has been exposed in emerging markets so far, and the value of a value discipline will be in avoiding the biggest capital-destroying rocks. If a rock emerges on the crowded shore of U.S. momentum, it could result in a major liquidity challenge, as momentum is often most intense on the downside as a crowded trade reverses. So investors are facing a large potential trade-off right now: continue to bet on the current dominance of momentum and the S&P 500, or bet on change and take an active value bet in names with attractive value and optionality, but with negative momentum,” said Clearbridge Investments in its market commentary. We aren’t sure whether long-term interest rates will top 5% and value stocks outperform growth, but we follow hedge fund investor letters to understand where the markets and stocks might be going. This article will lay out and discuss the hedge fund and institutional investor sentiment towards Sinclair Broadcast Group, Inc. (NASDAQ:SBGI).

Sinclair Broadcast Group, Inc. (NASDAQ:SBGI) investors should be aware of an increase in hedge fund sentiment recently. Our calculations also showed that sbgi isn’t among the 30 most popular stocks among hedge funds.

To most shareholders, hedge funds are perceived as worthless, outdated investment tools of yesteryear. While there are over 8000 funds with their doors open at the moment, We choose to focus on the crème de la crème of this group, approximately 750 funds. It is estimated that this group of investors oversee bulk of the smart money’s total asset base, and by monitoring their highest performing picks, Insider Monkey has identified a few investment strategies that have historically beaten the market. Insider Monkey’s flagship hedge fund strategy surpassed the S&P 500 index by nearly 5 percentage points per year since its inception in May 2014 through early November 2018. We were able to generate large returns even by identifying short candidates. Our portfolio of short stocks lost 27.5% since February 2017 (through March 12th) even though the market was up nearly 25% during the same period. We just shared a list of 6 short targets in our latest quarterly update and they are already down an average of 6% in less than a month.

At the end of the fourth quarter, a total of 33 of the hedge funds tracked by Insider Monkey held long positions in this stock, a change of 6% from one quarter earlier. By comparison, 36 hedge funds held shares or bullish call options in SBGI a year ago. With hedge funds’ sentiment swirling, there exists an “upper tier” of noteworthy hedge fund managers who were boosting their holdings considerably (or already accumulated large positions). 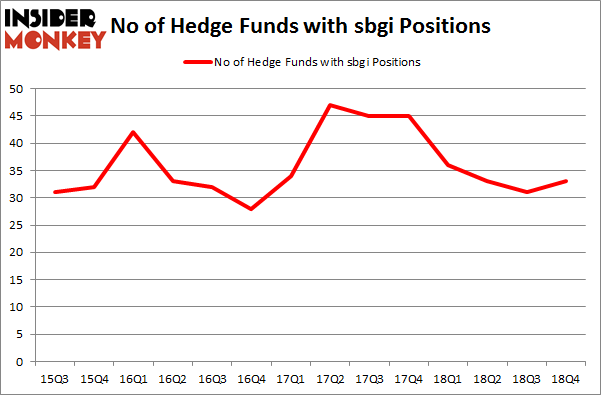 As one would reasonably expect, key money managers were leading the bulls’ herd. Meghalaya Partners, managed by Vasan Kesavan, Srikumar Kesavan and Sandeep Ramesh, created the biggest position in Sinclair Broadcast Group, Inc. (NASDAQ:SBGI). Meghalaya Partners had $10.8 million invested in the company at the end of the quarter. Cliff Asness’s AQR Capital Management also made a $1.7 million investment in the stock during the quarter. The following funds were also among the new SBGI investors: Paul Marshall and Ian Wace’s Marshall Wace LLP, Minhua Zhang’s Weld Capital Management, and Bradley Louis Radoff’s Fondren Management.

As you can see these stocks had an average of 17.75 hedge funds with bullish positions and the average amount invested in these stocks was $293 million. That figure was $378 million in SBGI’s case. Hilton Grand Vacations Inc. (NYSE:HGV) is the most popular stock in this table. On the other hand BRP Inc. (NASDAQ:DOOO) is the least popular one with only 11 bullish hedge fund positions. Compared to these stocks Sinclair Broadcast Group, Inc. (NASDAQ:SBGI) is more popular among hedge funds. Our calculations showed that top 15 most popular stocks) among hedge funds returned 24.2% through April 22nd and outperformed the S&P 500 ETF (SPY) by more than 7 percentage points. Hedge funds were also right about betting on SBGI as the stock returned 65.9% and outperformed the market by an even larger margin. Hedge funds were clearly right about piling into this stock relative to other stocks with similar market capitalizations.

Is GATX Corporation (GATX) A Good Stock To Buy?
Monthly Newsletter Strategy
Download a free copy of our newsletter and see the details inside!
Hedge Fund Resource Center
Related News
Sinclair Broadcast Group, Inc. (SBGI): Are Hedge Funds Right to Give Up On It? 35 Fresh Stories That You Should Read To Know How The Financial Markets Are Doing Today Is Sinclair Broadcast Group Inc. (SBGI) A Good Stock To Buy? Market Doesn’t Appreciate How Cyclical Apple (AAPL) Is: Nishkama Capital Talks about Its Investments This Stock Has Gained Over 700% Today, Plus the Latest on GoPro, Petrobras and Sinclair Why Are So Many Hedge Funds Long Sinclair Broadcast Group (SBGI)? Today’s Trending Stocks: Time Warner Inc, Sinclair Broadcast, Zoetis, and 2 More 18 Cute Tinder Bio Examples (Female) 20 Clever Bumble Bios for Guys 15 Most Physically Demanding Olympic Sports
Billionaire Hedge Funds