Rockwell Automation Inc. (NYSE:ROK) investors should pay attention to an increase in support from the world’s most elite money managers of late. ROK was in 35 hedge funds’ portfolios at the end of the fourth quarter of 2018. There were 28 hedge funds in our database with ROK positions at the end of the previous quarter. Our calculations also showed that ROK isn’t among the 30 most popular stocks among hedge funds.

What does the smart money think about Rockwell Automation Inc. (NYSE:ROK)? 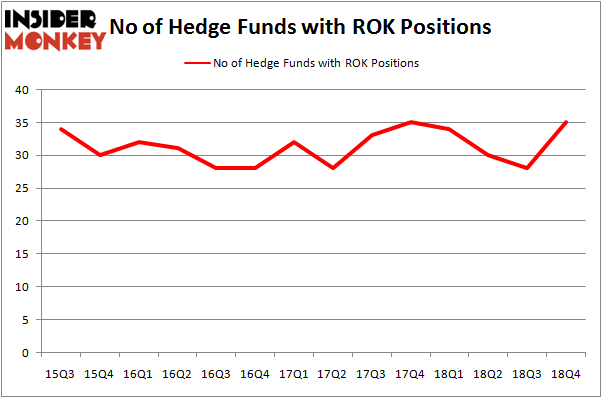 More specifically, Millennium Management was the largest shareholder of Rockwell Automation Inc. (NYSE:ROK), with a stake worth $155.6 million reported as of the end of September. Trailing Millennium Management was Two Sigma Advisors, which amassed a stake valued at $120.6 million. GLG Partners, Nitorum Capital, and GAMCO Investors were also very fond of the stock, giving the stock large weights in their portfolios.

As one would reasonably expect, key money managers were leading the bulls’ herd. Marshall Wace LLP, managed by Paul Marshall and Ian Wace, established the most outsized position in Rockwell Automation Inc. (NYSE:ROK). Marshall Wace LLP had $24 million invested in the company at the end of the quarter. John Brennan’s Sirios Capital Management also made a $23.2 million investment in the stock during the quarter. The other funds with new positions in the stock are Peter Rathjens, Bruce Clarke and John Campbell’s Arrowstreet Capital, Gregg Moskowitz’s Interval Partners, and Matthew Tewksbury’s Stevens Capital Management.

As you can see these stocks had an average of 35.5 hedge funds with bullish positions and the average amount invested in these stocks was $2484 million. That figure was $674 million in ROK’s case. TransDigm Group Incorporated (NYSE:TDG) is the most popular stock in this table. On the other hand Verisk Analytics, Inc. (NASDAQ:VRSK) is the least popular one with only 30 bullish hedge fund positions. Rockwell Automation Inc. (NYSE:ROK) is not the least popular stock in this group but hedge fund interest is still below average. Our calculations showed that top 15 most popular stocks among hedge funds returned 19.7% through March 15th and outperformed the S&P 500 ETF (SPY) by 6.6 percentage points. A handful of hedge funds were also right about betting on ROK as the stock returned 19.8% and outperformed the market as well.