Hedge funds and large money managers usually invest with a focus on the long-term horizon and, therefore, short-lived dips on the charts, usually don’t make them change their opinion towards a company. This time it may be different. During the first 6 weeks of the fourth quarter we observed increased volatility and small-cap stocks underperformed the market. Hedge fund investor letters indicated that they are cutting their overall exposure, closing out some position and doubling down on others. Let’s take a look at the hedge fund sentiment towards Rockwell Automation Inc. (NYSE:ROK) to find out whether it was one of their high conviction long-term ideas.

Rockwell Automation Inc. (NYSE:ROK) was in 28 hedge funds’ portfolios at the end of September. ROK investors should be aware of a decrease in hedge fund sentiment in recent months. There were 30 hedge funds in our database with ROK positions at the end of the previous quarter. Our calculations also showed that ROK isn’t among the 30 most popular stocks among hedge funds.

What does the smart money think about Rockwell Automation Inc. (NYSE:ROK)?

At the end of the third quarter, a total of 28 of the hedge funds tracked by Insider Monkey held long positions in this stock, a change of -7% from the second quarter of 2018. The graph below displays the number of hedge funds with bullish position in ROK over the last 13 quarters. With the smart money’s sentiment swirling, there exists an “upper tier” of noteworthy hedge fund managers who were adding to their stakes meaningfully (or already accumulated large positions). 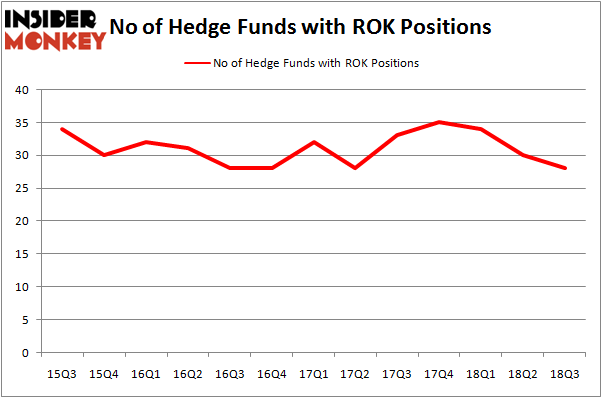 According to Insider Monkey’s hedge fund database, Millennium Management, managed by Israel Englander, holds the largest position in Rockwell Automation Inc. (NYSE:ROK). Millennium Management has a $214.8 million position in the stock, comprising 0.3% of its 13F portfolio. Coming in second is GLG Partners, managed by Noam Gottesman, which holds a $69.9 million position; the fund has 0.3% of its 13F portfolio invested in the stock. Other peers that hold long positions include Phill Gross and Robert Atchinson’s Adage Capital Management, Mario Gabelli’s GAMCO Investors and Seth Rosen’s Nitorum Capital.

Seeing as Rockwell Automation Inc. (NYSE:ROK) has faced declining sentiment from the entirety of the hedge funds we track, we can see that there exists a select few money managers who were dropping their full holdings in the third quarter. It’s worth mentioning that Principal Global Investors’s Columbus Circle Investors dumped the largest position of all the hedgies monitored by Insider Monkey, worth about $22.2 million in call options, and Gregg Moskowitz’s Interval Partners was right behind this move, as the fund cut about $15 million worth. These bearish behaviors are important to note, as total hedge fund interest was cut by 2 funds in the third quarter.

As you can see these stocks had an average of 34 hedge funds with bullish positions and the average amount invested in these stocks was $2.26 billion. That figure was $634 million in ROK’s case. Rockwell Collins, Inc. (NYSE:COL) is the most popular stock in this table. On the other hand CenturyLink, Inc. (NYSE:CTL) is the least popular one with only 24 bullish hedge fund positions. Rockwell Automation Inc. (NYSE:ROK) is not the least popular stock in this group but hedge fund interest is still below average. This is a slightly negative signal and we’d rather spend our time researching stocks that hedge funds are piling on. In this regard COL might be a better candidate to consider a long position.