The market has been volatile in the fourth quarter as the Federal Reserve continued its rate hikes to normalize the interest rates. Small cap stocks have been hit hard as a result, as the Russell 2000 ETF (IWM) has underperformed the larger S&P 500 ETF (SPY) by nearly 7 percentage points. SEC filings and hedge fund investor letters indicate that the smart money seems to be paring back their overall long exposure since summer months, and the funds’ movements is one of the reasons why the major indexes have retraced. In this article, we analyze what the smart money thinks of Prudential Public Limited Company (NYSE:PUK) and find out how it is affected by hedge funds’ moves.

Is Prudential Public Limited Company (NYSE:PUK) undervalued? Hedge funds are taking a bullish view. The number of long hedge fund positions went up by 4 recently. Our calculations also showed that PUK isn’t among the 30 most popular stocks among hedge funds. PUK was in 9 hedge funds’ portfolios at the end of the fourth quarter of 2018. There were 5 hedge funds in our database with PUK holdings at the end of the previous quarter.

How have hedgies been trading Prudential Public Limited Company (NYSE:PUK)? 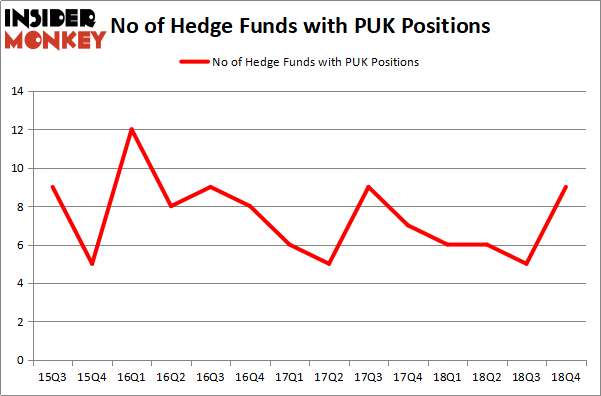 Of the funds tracked by Insider Monkey, Jim Simons’s Renaissance Technologies has the biggest position in Prudential Public Limited Company (NYSE:PUK), worth close to $16.3 million, accounting for less than 0.1%% of its total 13F portfolio. On Renaissance Technologies’s heels is PEAK6 Capital Management, managed by Matthew Hulsizer, which holds a $4.7 million position; the fund has less than 0.1%% of its 13F portfolio invested in the stock. Other professional money managers with similar optimism contain Peter Rathjens, Bruce Clarke and John Campbell’s Arrowstreet Capital, Paul Marshall and Ian Wace’s Marshall Wace LLP and Robert B. Gillam’s McKinley Capital Management.

As one would reasonably expect, some big names have been driving this bullishness. PEAK6 Capital Management, managed by Matthew Hulsizer, initiated the most outsized position in Prudential Public Limited Company (NYSE:PUK). PEAK6 Capital Management had $4.7 million invested in the company at the end of the quarter. Paul Marshall and Ian Wace’s Marshall Wace LLP also made a $1.1 million investment in the stock during the quarter. The following funds were also among the new PUK investors: Ken Griffin’s Citadel Investment Group, D. E. Shaw’s D E Shaw, and Michael Platt and William Reeves’s BlueCrest Capital Mgmt..

As you can see these stocks had an average of 25.5 hedge funds with bullish positions and the average amount invested in these stocks was $1145 million. That figure was $30 million in PUK’s case. Allergan plc (NYSE:AGN) is the most popular stock in this table. On the other hand Lloyds Banking Group PLC (NYSE:LYG) is the least popular one with only 10 bullish hedge fund positions. Compared to these stocks Prudential Public Limited Company (NYSE:PUK) is even less popular than LYG. Our calculations showed that top 15 most popular stocks among hedge funds returned 19.7% through March 15th and outperformed the S&P 500 ETF (SPY) by 6.6 percentage points. Hedge funds were also right about betting on PUK as the stock returned 22.4% and outperformed the market as well.