The latest 13F reporting period has come and gone, and Insider Monkey is again at the forefront when it comes to making use of this gold mine of data. We have processed the filings of the more than 700 world-class investment firms that we track and now have access to the collective wisdom contained in these filings, which are based on their December 31 holdings, data that is available nowhere else. Should you consider Nexstar Media Group, Inc. (NASDAQ:NXST) for your portfolio? We’ll look to this invaluable collective wisdom for the answer.

Nexstar Media Group, Inc. (NASDAQ:NXST) has seen a decrease in activity from the world’s largest hedge funds lately. Our calculations also showed that NXST isn’t among the 30 most popular stocks among hedge funds. 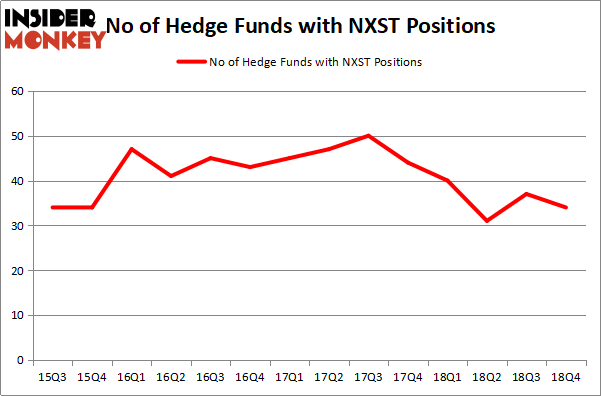 When looking at the institutional investors followed by Insider Monkey, Snehal Amin’s Windacre Partnership has the most valuable position in Nexstar Media Group, Inc. (NASDAQ:NXST), worth close to $198.6 million, corresponding to 11.4% of its total 13F portfolio. The second most bullish fund manager is Hound Partners, managed by Jonathan Auerbach, which holds a $178.3 million position; 5.7% of its 13F portfolio is allocated to the company. Remaining professional money managers that are bullish encompass Claus Moller’s P2 Capital Partners, Parag Vora’s HG Vora Capital Management and Peter S. Park’s Park West Asset Management.

Seeing as Nexstar Media Group, Inc. (NASDAQ:NXST) has faced a decline in interest from the smart money, we can see that there lies a certain “tier” of hedgies that slashed their full holdings by the end of the third quarter. It’s worth mentioning that Joshua Kaufman and Craig Nerenberg’s Brenner West Capital Partners dropped the largest position of the 700 funds monitored by Insider Monkey, worth an estimated $39.1 million in stock, and Alexander Mitchell’s Scopus Asset Management was right behind this move, as the fund dropped about $25.9 million worth. These transactions are interesting, as total hedge fund interest was cut by 3 funds by the end of the third quarter.

As you can see these stocks had an average of 22.25 hedge funds with bullish positions and the average amount invested in these stocks was $414 million. That figure was $975 million in NXST’s case. The Wendy’s Company (NASDAQ:WEN) is the most popular stock in this table. On the other hand MSA Safety Incorporated (NYSE:MSA) is the least popular one with only 17 bullish hedge fund positions. Compared to these stocks Nexstar Media Group, Inc. (NASDAQ:NXST) is more popular among hedge funds. Our calculations showed that top 15 most popular stocks) among hedge funds returned 24.2% through April 22nd and outperformed the S&P 500 ETF (SPY) by more than 7 percentage points. Hedge funds were also right about betting on NXST as the stock returned 45.5% and outperformed the market by an even larger margin. Hedge funds were clearly right about piling into this stock relative to other stocks with similar market capitalizations.