Were Hedge Funds Right About Flocking Into NCR Corporation (NCR) ?

The Insider Monkey team has completed processing the quarterly 13F filings for the December quarter submitted by the hedge funds and other money managers included in our extensive database. Most hedge fund investors endured a torrid quarter, which certainly propelled them to adjust their equity holdings so as to maintain the desired risk profile. As a result, the relevancy of these public filings and their content is indisputable, as they may reveal numerous high-potential stocks. The following article will discuss the smart money sentiment towards NCR Corporation (NYSE:NCR).

NCR Corporation (NYSE:NCR) was in 20 hedge funds’ portfolios at the end of December. NCR has seen an increase in activity from the world’s largest hedge funds of late. There were 17 hedge funds in our database with NCR holdings at the end of the previous quarter. Our calculations also showed that ncr isn’t among the 30 most popular stocks among hedge funds.

How have hedgies been trading NCR Corporation (NYSE:NCR)? 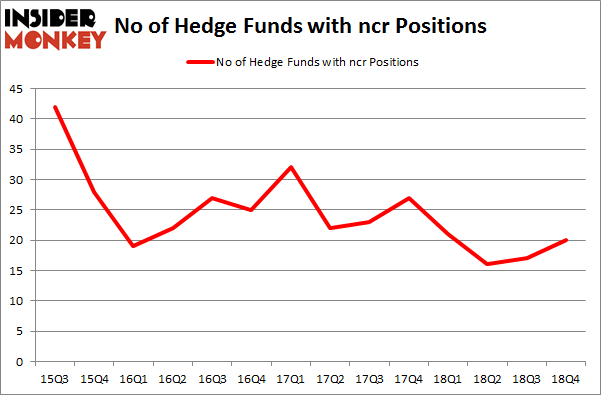 Among these funds, Nitorum Capital held the most valuable stake in NCR Corporation (NYSE:NCR), which was worth $27.4 million at the end of the third quarter. On the second spot was Engaged Capital which amassed $24.8 million worth of shares. Moreover, Nishkama Capital, GLG Partners, and D E Shaw were also bullish on NCR Corporation (NYSE:NCR), allocating a large percentage of their portfolios to this stock.

With a general bullishness amongst the heavyweights, key hedge funds have jumped into NCR Corporation (NYSE:NCR) headfirst. Nitorum Capital, managed by Seth Rosen, initiated the biggest position in NCR Corporation (NYSE:NCR). Nitorum Capital had $27.4 million invested in the company at the end of the quarter. Ravee Mehta’s Nishkama Capital also made a $20.4 million investment in the stock during the quarter. The following funds were also among the new NCR investors: Dmitry Balyasny’s Balyasny Asset Management, Mario Gabelli’s GAMCO Investors, and Bernard Selz’s Selz Capital.

As you can see these stocks had an average of 18 hedge funds with bullish positions and the average amount invested in these stocks was $223 million. That figure was $163 million in NCR’s case. Immunomedics, Inc. (NASDAQ:IMMU) is the most popular stock in this table. On the other hand Fulton Financial Corp (NASDAQ:FULT) is the least popular one with only 12 bullish hedge fund positions. NCR Corporation (NYSE:NCR) is not the most popular stock in this group but hedge fund interest is still above average. Our calculations showed that top 15 most popular stocks) among hedge funds returned 24.2% through April 22nd and outperformed the S&P 500 ETF (SPY) by more than 7 percentage points. Hedge funds were also right about betting on NCR as the stock returned 27.1% and outperformed the market by an even larger margin. Hedge funds were rewarded for their relative bullishness.