The latest 13F reporting period has come and gone, and Insider Monkey is again at the forefront when it comes to making use of this gold mine of data. We have processed the filings of the more than 700 world-class investment firms that we track and now have access to the collective wisdom contained in these filings, which are based on their December 31 holdings, data that is available nowhere else. Should you consider Mirati Therapeutics, Inc. (NASDAQ:MRTX) for your portfolio? We’ll look to this invaluable collective wisdom for the answer.

Mirati Therapeutics, Inc. (NASDAQ:MRTX) shareholders have witnessed an increase in hedge fund sentiment in recent months. MRTX was in 27 hedge funds’ portfolios at the end of the fourth quarter of 2018. There were 24 hedge funds in our database with MRTX positions at the end of the previous quarter. Our calculations also showed that MRTX isn’t among the 30 most popular stocks among hedge funds.

At Q4’s end, a total of 27 of the hedge funds tracked by Insider Monkey were bullish on this stock, a change of 13% from the second quarter of 2018. The graph below displays the number of hedge funds with bullish position in MRTX over the last 14 quarters. With hedgies’ positions undergoing their usual ebb and flow, there exists an “upper tier” of noteworthy hedge fund managers who were boosting their stakes significantly (or already accumulated large positions). 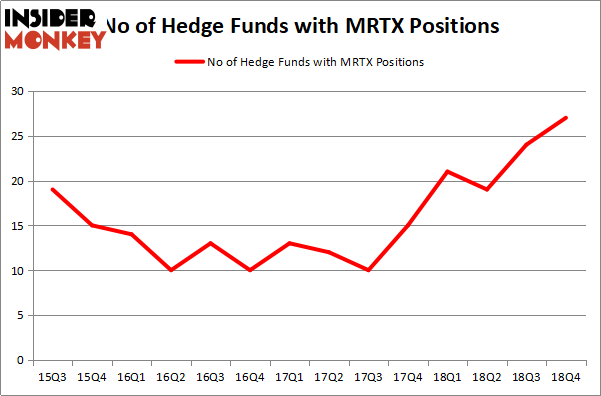 The largest stake in Mirati Therapeutics, Inc. (NASDAQ:MRTX) was held by venBio Select Advisor, which reported holding $203.5 million worth of stock at the end of September. It was followed by Baker Bros. Advisors with a $106.6 million position. Other investors bullish on the company included Cormorant Asset Management, Farallon Capital, and Deerfield Management.

With a general bullishness amongst the heavyweights, some big names have jumped into Mirati Therapeutics, Inc. (NASDAQ:MRTX) headfirst. EcoR1 Capital, managed by Oleg Nodelman, created the biggest position in Mirati Therapeutics, Inc. (NASDAQ:MRTX). EcoR1 Capital had $27.5 million invested in the company at the end of the quarter. Albert Cha and Frank Kung’s Vivo Capital also made a $10.7 million investment in the stock during the quarter. The following funds were also among the new MRTX investors: Joseph Edelman’s Perceptive Advisors, D. E. Shaw’s D E Shaw, and Minhua Zhang’s Weld Capital Management.

As you can see these stocks had an average of 15.25 hedge funds with bullish positions and the average amount invested in these stocks was $117 million. That figure was $610 million in MRTX’s case. Enanta Pharmaceuticals Inc (NASDAQ:ENTA) is the most popular stock in this table. On the other hand Atrion Corporation (NASDAQ:ATRI) is the least popular one with only 10 bullish hedge fund positions. Compared to these stocks Mirati Therapeutics, Inc. (NASDAQ:MRTX) is more popular among hedge funds. Our calculations showed that top 15 most popular stocks) among hedge funds returned 24.2% through April 22nd and outperformed the S&P 500 ETF (SPY) by more than 7 percentage points. Hedge funds were also right about betting on MRTX as the stock returned 46.1% and outperformed the market by an even larger margin. Hedge funds were clearly right about piling into this stock relative to other stocks with similar market capitalizations.