Were Hedge Funds Right About Flocking Into iRobot Corporation (IRBT) ?

Insider Monkey has processed numerous 13F filings of hedge funds and famous investors to create an extensive database of hedge fund holdings. The 13F filings show the hedge funds’ and investors’ positions as of the end of the fourth quarter. You can find write-ups about an individual hedge fund’s trades on numerous financial news websites. However, in this article we will take a look at their collective moves and analyze what the smart money thinks of iRobot Corporation (NASDAQ:IRBT) based on that data.

iRobot Corporation (NASDAQ:IRBT) investors should be aware of an increase in support from the world’s most elite money managers in recent months. IRBT was in 14 hedge funds’ portfolios at the end of December. There were 10 hedge funds in our database with IRBT holdings at the end of the previous quarter. Our calculations also showed that IRBT isn’t among the 30 most popular stocks among hedge funds.

In today’s marketplace there are dozens of formulas stock traders employ to analyze their holdings. A pair of the most under-the-radar formulas are hedge fund and insider trading activity. We have shown that, historically, those who follow the top picks of the elite money managers can trounce the broader indices by a very impressive margin (see the details here).

What have hedge funds been doing with iRobot Corporation (NASDAQ:IRBT)?

Heading into the first quarter of 2019, a total of 14 of the hedge funds tracked by Insider Monkey were bullish on this stock, a change of 40% from the second quarter of 2018. Below, you can check out the change in hedge fund sentiment towards IRBT over the last 14 quarters. With hedgies’ capital changing hands, there exists a select group of key hedge fund managers who were upping their stakes significantly (or already accumulated large positions). 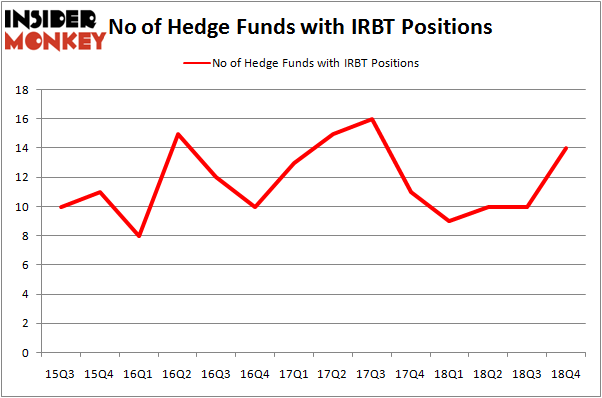 According to Insider Monkey’s hedge fund database, Columbus Circle Investors, managed by Principal Global Investors, holds the most valuable position in iRobot Corporation (NASDAQ:IRBT). Columbus Circle Investors has a $28.4 million position in the stock, comprising 0.8% of its 13F portfolio. The second most bullish fund manager is Ken Griffin of Citadel Investment Group, with a $14 million call position; less than 0.1%% of its 13F portfolio is allocated to the stock. Some other members of the smart money that are bullish encompass Dmitry Balyasny’s Balyasny Asset Management, Leon Shaulov’s Maplelane Capital and Daniel S. Och’s OZ Management.

As industrywide interest jumped, some big names have jumped into iRobot Corporation (NASDAQ:IRBT) headfirst. Maplelane Capital, managed by Leon Shaulov, created the biggest position in iRobot Corporation (NASDAQ:IRBT). Maplelane Capital had $10.7 million invested in the company at the end of the quarter. Peter Muller’s PDT Partners also made a $7 million investment in the stock during the quarter. The other funds with new positions in the stock are Paul Marshall and Ian Wace’s Marshall Wace LLP, Ken Fisher’s Fisher Asset Management, and Peter Algert and Kevin Coldiron’s Algert Coldiron Investors.

As you can see these stocks had an average of 13.75 hedge funds with bullish positions and the average amount invested in these stocks was $67 million. That figure was $80 million in IRBT’s case. Repligen Corporation (NASDAQ:RGEN) is the most popular stock in this table. On the other hand Norbord Inc. (NYSE:OSB) is the least popular one with only 7 bullish hedge fund positions. iRobot Corporation (NASDAQ:IRBT) is not the most popular stock in this group but hedge fund interest is still above average. Our calculations showed that top 15 most popular stocks) among hedge funds returned 24.2% through April 22nd and outperformed the S&P 500 ETF (SPY) by more than 7 percentage points. Hedge funds were also right about betting on IRBT as the stock returned 53.7% and outperformed the market by an even larger margin. Hedge funds were rewarded for their relative bullishness.