Out of thousands of stocks that are currently traded on the market, it is difficult to identify those that will really generate strong returns. Hedge funds and institutional investors spend millions of dollars on analysts with MBAs and PhDs, who are industry experts and well connected to other industry and media insiders on top of that. Individual investors can piggyback the hedge funds employing these talents and can benefit from their vast resources and knowledge in that way. We analyze quarterly 13F filings of nearly 750 hedge funds and, by looking at the smart money sentiment that surrounds a stock, we can determine whether it has the potential to beat the market over the long-term. Therefore, let’s take a closer look at what smart money thinks about Huazhu Group Limited (NASDAQ:HTHT).

Huazhu Group Limited (NASDAQ:HTHT) investors should be aware of an increase in activity from the world’s largest hedge funds of late. Our calculations also showed that HTHT isn’t among the 30 most popular stocks among hedge funds. 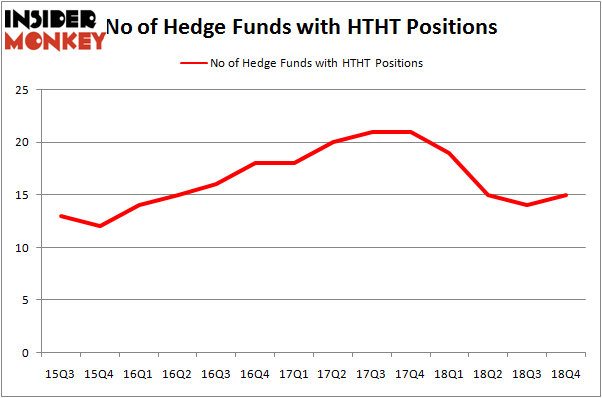 As one would reasonably expect, key hedge funds were leading the bulls’ herd. Yiheng Capital, managed by Jonathan Guo, initiated the biggest position in Huazhu Group Limited (NASDAQ:HTHT). Yiheng Capital had $76.2 million invested in the company at the end of the quarter. Kerr Neilson’s Platinum Asset Management also made a $19.2 million investment in the stock during the quarter. The other funds with new positions in the stock are Richard Driehaus’s Driehaus Capital, Charles Clough’s Clough Capital Partners, and Gavin Saitowitz and Cisco J. del Valle’s Springbok Capital.

As you can see these stocks had an average of 31.75 hedge funds with bullish positions and the average amount invested in these stocks was $1079 million. That figure was $147 million in HTHT’s case. United Rentals, Inc. (NYSE:URI) is the most popular stock in this table. On the other hand BeiGene, Ltd. (NASDAQ:BGNE) is the least popular one with only 15 bullish hedge fund positions. Compared to these stocks Huazhu Group Limited (NASDAQ:HTHT) is even less popular than BGNE. Considering that hedge funds aren’t fond of this stock in relation to other companies analyzed in this article, it may be a good idea to analyze it in detail and understand why the smart money isn’t behind this stock. This isn’t necessarily bad news. Although it is possible that hedge funds may think the stock is overpriced and view the stock as a short candidate, they may not be very familiar with the bullish thesis. Our calculations showed that top 15 most popular stocks among hedge funds returned 19.7% through March 15th and outperformed the S&P 500 ETF (SPY) by 6.6 percentage points. Hedge funds were also right about betting on HTHT as the stock returned 36.3% and outperformed the market as well. You can see the entire list of these shrewd hedge funds here.