Houlihan Lokey Inc (NYSE:HLI) shareholders have witnessed an increase in support from the world’s most elite money managers lately. Our calculations also showed that hli isn’t among the 30 most popular stocks among hedge funds.

At the end of the fourth quarter, a total of 18 of the hedge funds tracked by Insider Monkey held long positions in this stock, a change of 29% from one quarter earlier. On the other hand, there were a total of 18 hedge funds with a bullish position in HLI a year ago. With the smart money’s capital changing hands, there exists a select group of key hedge fund managers who were boosting their holdings considerably (or already accumulated large positions). 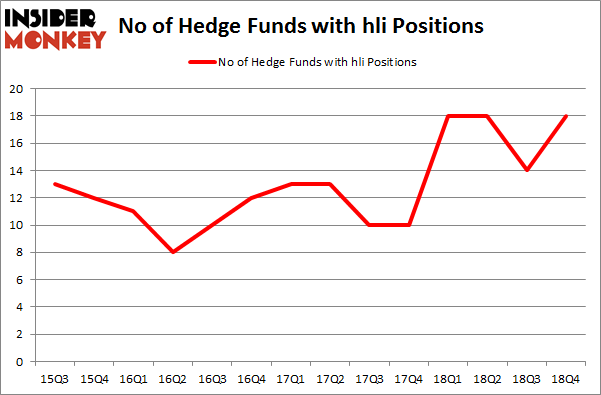 With a general bullishness amongst the heavyweights, some big names were breaking ground themselves. Buckingham Capital Management, managed by David Keidan, initiated the most valuable position in Houlihan Lokey Inc (NYSE:HLI). Buckingham Capital Management had $1.4 million invested in the company at the end of the quarter. Noam Gottesman’s GLG Partners also made a $1.2 million investment in the stock during the quarter. The other funds with new positions in the stock are Minhua Zhang’s Weld Capital Management, Hoon Kim’s Quantinno Capital, and Mike Vranos’s Ellington.

As you can see these stocks had an average of 16 hedge funds with bullish positions and the average amount invested in these stocks was $140 million. That figure was $138 million in HLI’s case. Rexnord Corp (NYSE:RXN) is the most popular stock in this table. On the other hand Nextera Energy Partners LP (NYSE:NEP) is the least popular one with only 12 bullish hedge fund positions. Houlihan Lokey Inc (NYSE:HLI) is not the most popular stock in this group but hedge fund interest is still above average. Our calculations showed that top 15 most popular stocks) among hedge funds returned 24.2% through April 22nd and outperformed the S&P 500 ETF (SPY) by more than 7 percentage points. Hedge funds were also right about betting on HLI as the stock returned 33.3% and outperformed the market by an even larger margin. Hedge funds were rewarded for their relative bullishness.