Were Hedge Funds Right About Flocking Into Ecopetrol S.A. (EC)?

Ecopetrol S.A. (NYSE:EC) has experienced an increase in hedge fund interest in recent months. Our calculations also showed that EC isn’t among the 30 most popular stocks among hedge funds.

What have hedge funds been doing with Ecopetrol S.A. (NYSE:EC)?

At Q4’s end, a total of 16 of the hedge funds tracked by Insider Monkey held long positions in this stock, a change of 23% from one quarter earlier. On the other hand, there were a total of 8 hedge funds with a bullish position in EC a year ago. With hedge funds’ sentiment swirling, there exists a few key hedge fund managers who were increasing their stakes meaningfully (or already accumulated large positions). 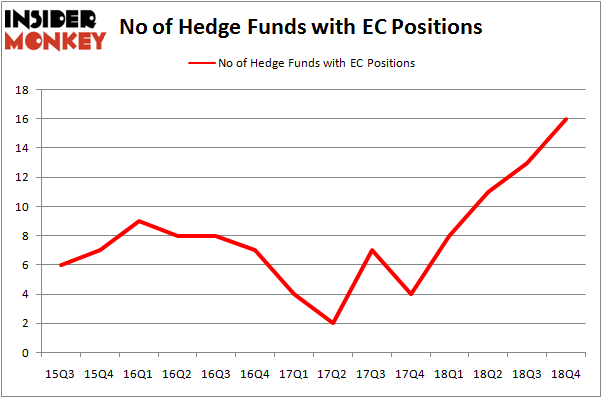 Among these funds, Renaissance Technologies held the most valuable stake in Ecopetrol S.A. (NYSE:EC), which was worth $116 million at the end of the third quarter. On the second spot was Fisher Asset Management which amassed $37 million worth of shares. Moreover, D E Shaw, Millennium Management, and Point72 Asset Management were also bullish on Ecopetrol S.A. (NYSE:EC), allocating a large percentage of their portfolios to this stock.

With a general bullishness amongst the heavyweights, specific money managers were breaking ground themselves. Point72 Asset Management, managed by Steve Cohen, initiated the most outsized position in Ecopetrol S.A. (NYSE:EC). Point72 Asset Management had $5.2 million invested in the company at the end of the quarter. Matthew Tewksbury’s Stevens Capital Management also made a $1 million investment in the stock during the quarter. The other funds with brand new EC positions are Ken Heebner’s Capital Growth Management, Dmitry Balyasny’s Balyasny Asset Management, and Ken Griffin’s Citadel Investment Group.

As you can see these stocks had an average of 17 hedge funds with bullish positions and the average amount invested in these stocks was $801 million. That figure was $193 million in EC’s case. SYSCO Corporation (NYSE:SYY) is the most popular stock in this table. On the other hand China Unicom (Hong Kong) Limited (NYSE:CHU) is the least popular one with only 9 bullish hedge fund positions. Ecopetrol S.A. (NYSE:EC) is not the least popular stock in this group but hedge fund interest is still below average. However, hedge fund sentiment is dramatically improving as several hedge funds initiated brand new positions in the stock. Our calculations showed that top 15 most popular stocks among hedge funds returned 19.7% through March 15th and outperformed the S&P 500 ETF (SPY) by 6.6 percentage points. Hedge funds were also right about betting on EC as the stock returned 34.6% and outperformed the market as well.