Before we spend countless hours researching a company, we’d like to analyze what insiders, hedge funds and billionaire investors think of the stock first. We would like to do so because our research has shown that the elite investors’ consensus returns have been exceptional. In the following paragraphs, we find out what the billionaire investors and hedge funds think of Descartes Systems Group (NASDAQ:DSGX).

Descartes Systems Group (NASDAQ:DSGX) investors should pay attention to an increase in support from the world’s most elite money managers lately. DSGX was in 12 hedge funds’ portfolios at the end of the fourth quarter of 2018. There were 9 hedge funds in our database with DSGX holdings at the end of the previous quarter. Our calculations also showed that DSGX isn’t among the 30 most popular stocks among hedge funds. 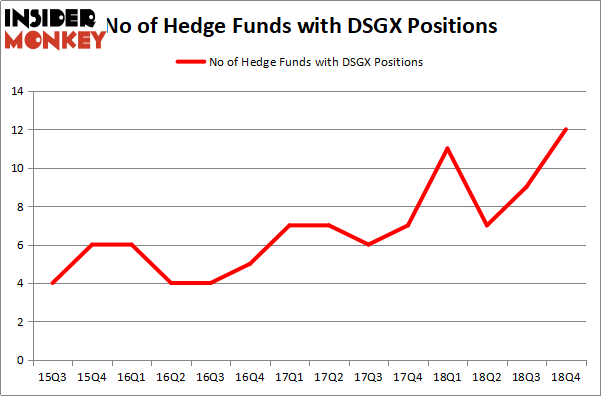 Among these funds, Renaissance Technologies held the most valuable stake in Descartes Systems Group (NASDAQ:DSGX), which was worth $18.3 million at the end of the third quarter. On the second spot was Echo Street Capital Management which amassed $15 million worth of shares. Moreover, Arrowstreet Capital, Diker Management, and Tiger Legatus Capital were also bullish on Descartes Systems Group (NASDAQ:DSGX), allocating a large percentage of their portfolios to this stock.

Now, some big names were breaking ground themselves. Diker Management, managed by Mark N. Diker, created the most outsized position in Descartes Systems Group (NASDAQ:DSGX). Diker Management had $4.6 million invested in the company at the end of the quarter. Chuck Royce’s Royce & Associates also made a $4.1 million investment in the stock during the quarter. The other funds with new positions in the stock are Israel Englander’s Millennium Management, Ken Griffin’s Citadel Investment Group, and Michael Platt and William Reeves’s BlueCrest Capital Mgmt..

As you can see these stocks had an average of 14.75 hedge funds with bullish positions and the average amount invested in these stocks was $199 million. That figure was $66 million in DSGX’s case. The Ensign Group, Inc. (NASDAQ:ENSG) is the most popular stock in this table. On the other hand Xencor Inc (NASDAQ:XNCR) is the least popular one with only 13 bullish hedge fund positions. Compared to these stocks Descartes Systems Group (NASDAQ:DSGX) is even less popular than XNCR. Hedge funds clearly dropped the ball on DSGX as the stock delivered strong returns, though hedge funds’ consensus picks still generated respectable returns. Our calculations showed that top 15 most popular stocks) among hedge funds returned 24.2% through April 22nd and outperformed the S&P 500 ETF (SPY) by more than 7 percentage points. A small number of hedge funds were also right about betting on DSGX as the stock returned 44.2% and outperformed the market by an even larger margin.