Were Hedge Funds Right About Flocking Into Cosan Limited (CZZ) ?

Cosan Limited (NYSE:CZZ) was in 18 hedge funds’ portfolios at the end of December. CZZ has seen an increase in hedge fund interest recently. There were 13 hedge funds in our database with CZZ positions at the end of the previous quarter. Our calculations also showed that CZZ isn’t among the 30 most popular stocks among hedge funds.

In the eyes of most stock holders, hedge funds are perceived as worthless, old financial vehicles of the past. While there are more than 8000 funds trading today, Our experts look at the leaders of this group, around 750 funds. These money managers watch over the lion’s share of the hedge fund industry’s total asset base, and by tracking their first-class equity investments, Insider Monkey has deciphered many investment strategies that have historically outrun the broader indices. Insider Monkey’s flagship hedge fund strategy beat the S&P 500 index by nearly 5 percentage points per year since its inception in May 2014 through early November 2018. We were able to generate large returns even by identifying short candidates. Our portfolio of short stocks lost 27.5% since February 2017 (through March 12th) even though the market was up nearly 25% during the same period. We just shared a list of 6 short targets in our latest quarterly update and they are already down an average of 6% in less than a month. 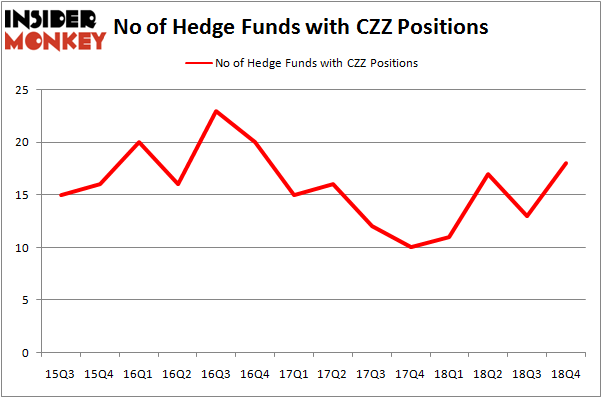 When looking at the institutional investors followed by Insider Monkey, Renaissance Technologies, managed by Jim Simons, holds the biggest position in Cosan Limited (NYSE:CZZ). Renaissance Technologies has a $45.4 million position in the stock, comprising less than 0.1%% of its 13F portfolio. The second largest stake is held by Moon Capital, led by John W. Moon, holding a $21.8 million position; the fund has 13.6% of its 13F portfolio invested in the stock. Other hedge funds and institutional investors that are bullish contain Peter Rathjens, Bruce Clarke and John Campbell’s Arrowstreet Capital, Jerome L. Simon’s Lonestar Capital Management and Steve Cohen’s Point72 Asset Management.

Now, some big names were leading the bulls’ herd. Point72 Asset Management, managed by Steve Cohen, assembled the most outsized position in Cosan Limited (NYSE:CZZ). Point72 Asset Management had $4.3 million invested in the company at the end of the quarter. Matthew Halbower’s Pentwater Capital Management also made a $3.1 million investment in the stock during the quarter. The following funds were also among the new CZZ investors: Paul Marshall and Ian Wace’s Marshall Wace LLP, Peter Muller’s PDT Partners, and Parvinder Thiara’s Athanor Capital.

As you can see these stocks had an average of 17.75 hedge funds with bullish positions and the average amount invested in these stocks was $244 million. That figure was $110 million in CZZ’s case. KBR, Inc. (NYSE:KBR) is the most popular stock in this table. On the other hand Companhia Paranaense de Energia – COPEL (NYSE:ELP) is the least popular one with only 8 bullish hedge fund positions. Cosan Limited (NYSE:CZZ) is not the most popular stock in this group but hedge fund interest is still above average. Our calculations showed that top 15 most popular stocks) among hedge funds returned 24.2% through April 22nd and outperformed the S&P 500 ETF (SPY) by more than 7 percentage points. Hedge funds were also right about betting on CZZ as the stock returned 39.5% and outperformed the market by an even larger margin. Hedge funds were rewarded for their relative bullishness.