Chipotle Mexican Grill, Inc. (NYSE:CMG) shareholders have witnessed an increase in support from the world’s most elite money managers of late. Even though our calculations also showed that CMG isn’t among the 30 most popular stocks among hedge funds, the hedge fund sentiment towards CMG is nearing its all time high.

At the moment there are a lot of indicators market participants use to evaluate stocks. Two of the most useful indicators are hedge fund and insider trading sentiment. Our researchers have shown that, historically, those who follow the top picks of the top money managers can outperform the market by a healthy margin (see the details here).

What have hedge funds been doing with Chipotle Mexican Grill, Inc. (NYSE:CMG)?

At the end of the fourth quarter, a total of 38 of the hedge funds tracked by Insider Monkey held long positions in this stock, a change of 15% from one quarter earlier. Below, you can check out the change in hedge fund sentiment towards CMG over the last 14 quarters. With hedgies’ sentiment swirling, there exists a few key hedge fund managers who were adding to their holdings significantly (or already accumulated large positions). 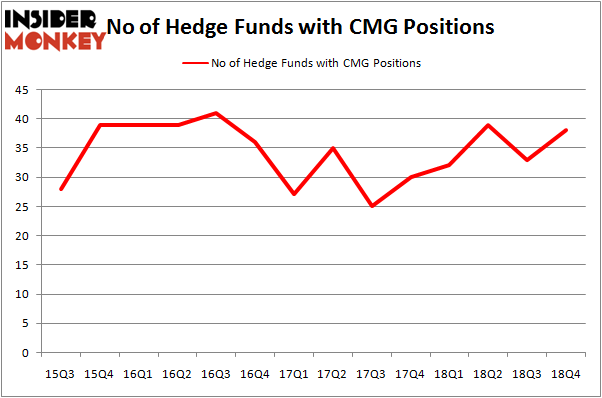 More specifically, Pershing Square was the largest shareholder of Chipotle Mexican Grill, Inc. (NYSE:CMG), with a stake worth $838 million reported as of the end of September. Trailing Pershing Square was Renaissance Technologies, which amassed a stake valued at $535.6 million. Citadel Investment Group, AQR Capital Management, and Generation Investment Management were also very fond of the stock, giving the stock large weights in their portfolios.

As you can see these stocks had an average of 23.5 hedge funds with bullish positions and the average amount invested in these stocks was $891 million. That figure was $2036 million in CMG’s case. Hess Corporation (NYSE:HES) is the most popular stock in this table. On the other hand Cna Financial Corporation (NYSE:CNA) is the least popular one with only 13 bullish hedge fund positions. Compared to these stocks Chipotle Mexican Grill, Inc. (NYSE:CMG) is more popular among hedge funds. Considering that hedge funds are fond of this stock in relation to its market cap peers, it may be a good idea to analyze it in detail and potentially include it in your portfolio. Our calculations showed that top 15 most popular stocks among hedge funds returned 19.7% through March 15th and outperformed the S&P 500 ETF (SPY) by 6.6 percentage points. Hedge funds were also right about betting on CMG as the stock returned 47.9% and outperformed the market as well. You can see the entire list of these shrewd hedge funds here.