Is Canadian Pacific Railway Limited (NYSE:CP) an attractive investment right now? Money managers are becoming hopeful. The number of bullish hedge fund positions went up by 10 lately. Even though our calculations also showed that CP isn’t among the 30 most popular stocks among hedge funds, overall hedge fund sentiment towards the stock is at an all time high.

According to most shareholders, hedge funds are assumed to be slow, old investment tools of years past. While there are more than 8000 funds trading at present, Our experts hone in on the moguls of this club, approximately 750 funds. These money managers oversee the majority of the hedge fund industry’s total asset base, and by tailing their first-class investments, Insider Monkey has revealed a number of investment strategies that have historically defeated the market. Insider Monkey’s flagship hedge fund strategy exceeded the S&P 500 index by nearly 5 percentage points per annum since its inception in May 2014 through early November 2018. We were able to generate large returns even by identifying short candidates. Our portfolio of short stocks lost 27.5% since February 2017 (through March 12th) even though the market was up nearly 25% during the same period. We just shared a list of 6 short targets in our latest quarterly update and they are already down an average of 6% in less than a month.

At Q4’s end, a total of 40 of the hedge funds tracked by Insider Monkey held long positions in this stock, a change of 33% from the previous quarter. By comparison, 25 hedge funds held shares or bullish call options in CP a year ago. With hedgies’ positions undergoing their usual ebb and flow, there exists a select group of key hedge fund managers who were increasing their stakes substantially (or already accumulated large positions). 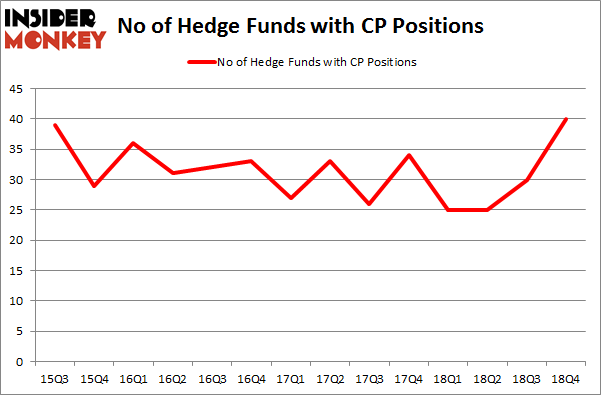 Among these funds, Lone Pine Capital held the most valuable stake in Canadian Pacific Railway Limited (NYSE:CP), which was worth $615.6 million at the end of the third quarter. On the second spot was Egerton Capital Limited which amassed $557.9 million worth of shares. Moreover, Arrowstreet Capital, Citadel Investment Group, and Viking Global were also bullish on Canadian Pacific Railway Limited (NYSE:CP), allocating a large percentage of their portfolios to this stock.

Consequently, key money managers have been driving this bullishness. Viking Global, managed by Andreas Halvorsen, assembled the most outsized position in Canadian Pacific Railway Limited (NYSE:CP). Viking Global had $84.4 million invested in the company at the end of the quarter. Joseph Samuels’s Islet Management also initiated a $71 million position during the quarter. The other funds with new positions in the stock are Jim Simons’s Renaissance Technologies, Mark Kingdon’s Kingdon Capital, and Greg Poole’s Echo Street Capital Management.

As you can see these stocks had an average of 19.75 hedge funds with bullish positions and the average amount invested in these stocks was $584 million. That figure was $2103 million in CP’s case. Sirius XM Holdings Inc (NASDAQ:SIRI) is the most popular stock in this table. On the other hand Thomson Reuters Corporation (NYSE:TRI) is the least popular one with only 19 bullish hedge fund positions. Compared to these stocks Canadian Pacific Railway Limited (NYSE:CP) is more popular among hedge funds. Our calculations showed that top 15 most popular stocks among hedge funds returned 19.7% through March 15th and outperformed the S&P 500 ETF (SPY) by 6.6 percentage points. Hedge funds were also right about betting on CP, though not to the same extent, as the stock returned 15.6% and outperformed the market as well.