Were Hedge Funds Right About Flocking Into Cactus, Inc. (WHD) ?

Is Cactus, Inc. (NYSE:WHD) a good investment right now? We check hedge fund and billionaire investor sentiment before delving into hours of research. Hedge funds spend millions of dollars on Ivy League graduates, expert networks, and get tips from investment bankers and industry insiders. Sure they sometimes fail miserably but historically their consensus stock picks outperformed the market after adjusting for known risk factors.

Is Cactus, Inc. (NYSE:WHD) a buy, sell, or hold? Hedge funds are in an optimistic mood. The number of long hedge fund positions increased by 1 in recent months. Our calculations also showed that whd isn’t among the 30 most popular stocks among hedge funds.

What does the smart money think about Cactus, Inc. (NYSE:WHD)? 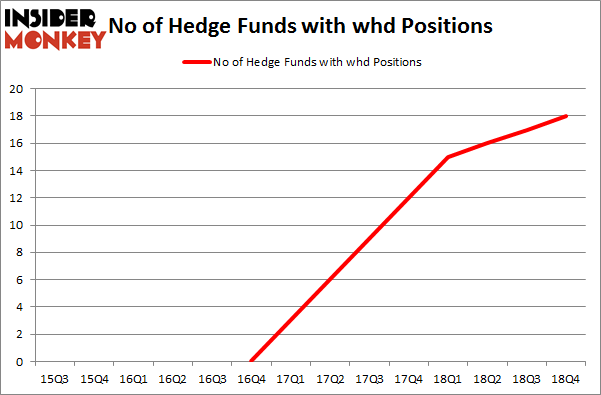 According to publicly available hedge fund and institutional investor holdings data compiled by Insider Monkey, Millennium Management, managed by Israel Englander, holds the largest position in Cactus, Inc. (NYSE:WHD). Millennium Management has a $46.3 million position in the stock, comprising 0.1% of its 13F portfolio. Coming in second is Todd J. Kantor of Encompass Capital Advisors, with a $22.1 million position; the fund has 2.4% of its 13F portfolio invested in the stock. Other peers with similar optimism include Ken Griffin’s Citadel Investment Group, Daniel Arbess’s Perella Weinberg Partners and Phill Gross and Robert Atchinson’s Adage Capital Management.

Consequently, some big names were breaking ground themselves. Marshall Wace LLP, managed by Paul Marshall and Ian Wace, assembled the most valuable position in Cactus, Inc. (NYSE:WHD). Marshall Wace LLP had $10.2 million invested in the company at the end of the quarter. Steve Cohen’s Point72 Asset Management also initiated a $3.3 million position during the quarter. The other funds with new positions in the stock are Brandon Haley’s Holocene Advisors and Peter Algert and Kevin Coldiron’s Algert Coldiron Investors.

As you can see these stocks had an average of 18.25 hedge funds with bullish positions and the average amount invested in these stocks was $219 million. That figure was $160 million in WHD’s case. Travelport Worldwide Ltd (NYSE:TVPT) is the most popular stock in this table. On the other hand Agree Realty Corporation (NYSE:ADC) is the least popular one with only 11 bullish hedge fund positions. Cactus, Inc. (NYSE:WHD) is not the least popular stock in this group but hedge fund interest is still below average. Our calculations showed that top 15 most popular stocks) among hedge funds returned 24.2% through April 22nd and outperformed the S&P 500 ETF (SPY) by more than 7 percentage points. A small number of hedge funds were also right about betting on WHD as the stock returned 43.9% and outperformed the market by an even larger margin.