We can judge whether Cactus, Inc. (NYSE:WHD) is a good investment right now by following the lead of some of the best investors in the world and piggybacking their ideas. There’s no better way to get these firms’ immense resources and analytical capabilities working for us than to follow their lead into their best ideas. While not all of these picks will be winners, research shows that these picks historically outperformed the market when we factor in known risk factors.

Is Cactus, Inc. (NYSE:WHD) an exceptional investment today? Money managers are in a bullish mood. The number of long hedge fund bets inched up by 1 in recent months. Our calculations also showed that WHD isn’t among the 30 most popular stocks among hedge funds.

We’re going to take a glance at the key hedge fund action regarding Cactus, Inc. (NYSE:WHD).

At the end of the third quarter, a total of 17 of the hedge funds tracked by Insider Monkey held long positions in this stock, a change of 6% from the previous quarter. Below, you can check out the change in hedge fund sentiment towards WHD over the last 13 quarters. So, let’s see which hedge funds were among the top holders of the stock and which hedge funds were making big moves. 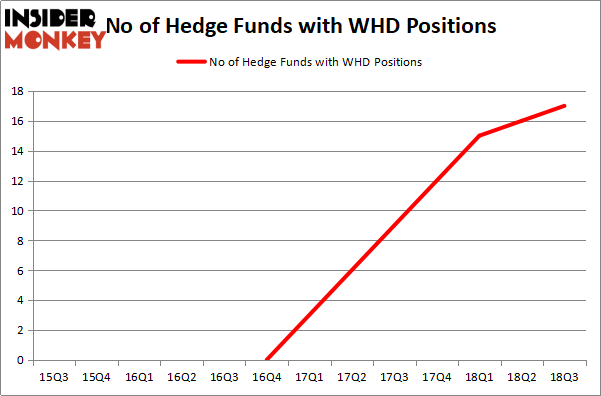 More specifically, Millennium Management was the largest shareholder of Cactus, Inc. (NYSE:WHD), with a stake worth $64.1 million reported as of the end of September. Trailing Millennium Management was Brenham Capital Management, which amassed a stake valued at $31.6 million. Perella Weinberg Partners, Driehaus Capital, and Encompass Capital Advisors were also very fond of the stock, giving the stock large weights in their portfolios.

As you can see these stocks had an average of 10 hedge funds with bullish positions and the average amount invested in these stocks was $129 million. That figure was $203 million in WHD’s case. Bank of N.T. Butterfield & Son Limited (The) (NYSE:NTB) is the most popular stock in this table. On the other hand Eaton Vance Tax-Managed Global Diversified Equity Income Fund (NYSE:EXG) is the least popular one with only 2 bullish hedge fund positions. Compared to these stocks Cactus, Inc. (NYSE:WHD) is more popular among hedge funds. Considering that hedge funds are fond of this stock in relation to its market cap peers, it may be a good idea to analyze it in detail and potentially include it in your portfolio.

Is Federal Signal Corporation (FSS) A Good Stock To Buy?
Monthly Newsletter Strategy
Download a free copy of our newsletter and see the details inside!
Hedge Fund Resource Center
Related News
11 Countries With The Worst Modern Music In The World The Top 5 Robo Advisor Apps of 2018 Five Reasons You Need a Day-Trading Mentor
Billionaire Hedge Funds