The latest 13F reporting period has come and gone, and Insider Monkey is again at the forefront when it comes to making use of this gold mine of data. We have processed the filings of the more than 700 world-class investment firms that we track and now have access to the collective wisdom contained in these filings, which are based on their December 31 holdings, data that is available nowhere else. Should you consider Hyatt Hotels Corporation (NYSE:H) for your portfolio? We’ll look to this invaluable collective wisdom for the answer.

Is Hyatt Hotels Corporation (NYSE:H) ready to rally soon? Investors who are in the know are becoming less hopeful. The number of long hedge fund bets retreated by 6 lately. Our calculations also showed that H isn’t among the 30 most popular stocks among hedge funds.

What does the smart money think about Hyatt Hotels Corporation (NYSE:H)?

Heading into the first quarter of 2019, a total of 25 of the hedge funds tracked by Insider Monkey were long this stock, a change of -19% from one quarter earlier. By comparison, 35 hedge funds held shares or bullish call options in H a year ago. With hedgies’ capital changing hands, there exists a few key hedge fund managers who were boosting their holdings meaningfully (or already accumulated large positions). 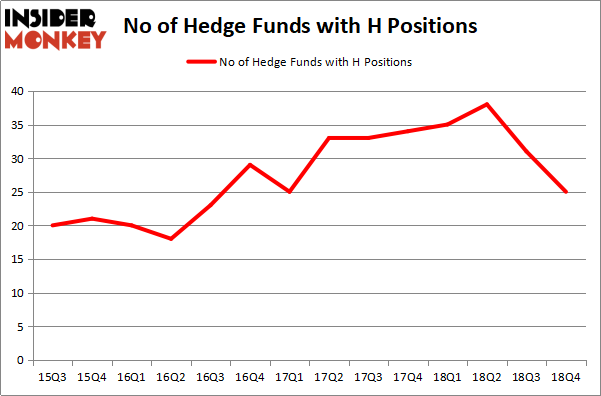 When looking at the institutional investors followed by Insider Monkey, Robert Joseph Caruso’s Select Equity Group has the biggest position in Hyatt Hotels Corporation (NYSE:H), worth close to $247.5 million, comprising 1.9% of its total 13F portfolio. Sitting at the No. 2 spot is D E Shaw, managed by D. E. Shaw, which holds a $82.8 million position; 0.1% of its 13F portfolio is allocated to the stock. Other peers that are bullish comprise Cliff Asness’s AQR Capital Management, John Khoury’s Long Pond Capital and John Overdeck and David Siegel’s Two Sigma Advisors.

Because Hyatt Hotels Corporation (NYSE:H) has experienced declining sentiment from hedge fund managers, it’s easy to see that there is a sect of fund managers who were dropping their full holdings last quarter. Interestingly, Malcolm Fairbairn’s Ascend Capital sold off the biggest position of all the hedgies watched by Insider Monkey, comprising an estimated $54.7 million in stock, and Alexander Mitchell’s Scopus Asset Management was right behind this move, as the fund cut about $37.5 million worth. These transactions are interesting, as aggregate hedge fund interest fell by 6 funds last quarter.

Let’s now review hedge fund activity in other stocks – not necessarily in the same industry as Hyatt Hotels Corporation (NYSE:H) but similarly valued. We will take a look at West Pharmaceutical Services Inc. (NYSE:WST), A. O. Smith Corporation (NYSE:AOS), Molina Healthcare, Inc. (NYSE:MOH), and Under Armour Inc (NYSE:UA). This group of stocks’ market caps are closest to H’s market cap.

As you can see these stocks had an average of 25.75 hedge funds with bullish positions and the average amount invested in these stocks was $607 million. That figure was $638 million in H’s case. A. O. Smith Corporation (NYSE:AOS) is the most popular stock in this table. On the other hand West Pharmaceutical Services Inc. (NYSE:WST) is the least popular one with only 20 bullish hedge fund positions. Hyatt Hotels Corporation (NYSE:H) is not the least popular stock in this group but hedge fund interest is still below average. This is a slightly negative signal and we’d rather spend our time researching stocks that hedge funds are piling on. Our calculations showed that top 15 most popular stocks among hedge funds returned 21.3% through April 8th and outperformed the S&P 500 ETF (SPY) by more than 5 percentage points. Unfortunately Hyatt wasn’t in this group. Hedge funds that bet on Hyatt were disappointed as the stock returned 14.1% and underperformed the market. If you are interested in investing in large cap stocks, you should check out the top 15 hedge fund stocks as 12 of these outperformed the market.