Is Elanco Animal Health Incorporated (NYSE:ELAN) a good investment right now? We check hedge fund and billionaire investor sentiment before delving into hours of research. Hedge funds spend millions of dollars on Ivy League graduates, expert networks, and get tips from investment bankers and industry insiders. Sure they sometimes fail miserably but historically their consensus stock picks outperformed the market after adjusting for known risk factors.

Elanco Animal Health Incorporated (NYSE:ELAN) investors should pay attention to a huge decrease in hedge fund interest of late. ELAN was in 18 hedge funds’ portfolios at the end of the fourth quarter of 2018. There were 36 hedge funds in our database with ELAN holdings at the end of the previous quarter. Our calculations also showed that ELAN isn’t among the 30 most popular stocks among hedge funds.

What does the smart money think about Elanco Animal Health Incorporated (NYSE:ELAN)? 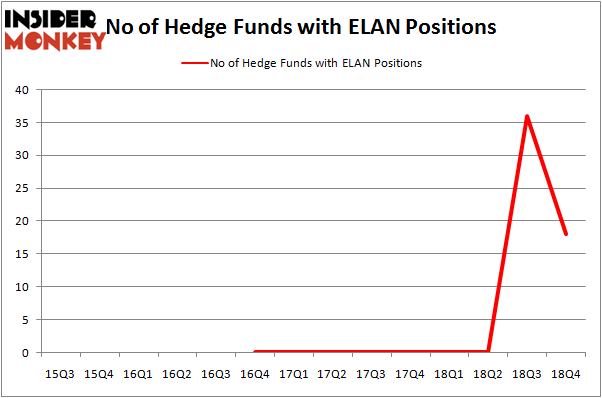 When looking at the institutional investors followed by Insider Monkey, D. E. Shaw’s D E Shaw has the number one position in Elanco Animal Health Incorporated (NYSE:ELAN), worth close to $46.7 million, amounting to 0.1% of its total 13F portfolio. Coming in second is Matthew Halbower of Pentwater Capital Management, with a $26.3 million position; 0.2% of its 13F portfolio is allocated to the stock. Other professional money managers that are bullish include Steve Cohen’s Point72 Asset Management, Benjamin A. Smith’s Laurion Capital Management and Ian Simm’s Impax Asset Management.

Due to the fact that Elanco Animal Health Incorporated (NYSE:ELAN) has witnessed a decline in interest from the smart money, we can see that there exists a select few hedge funds who were dropping their full holdings last quarter. Intriguingly, Robert Joseph Caruso’s Select Equity Group sold off the largest investment of the 700 funds tracked by Insider Monkey, valued at close to $34.9 million in stock. Aaron Cowen’s fund, Suvretta Capital Management, also said goodbye to its stock, about $34.7 million worth. These moves are intriguing to say the least, as aggregate hedge fund interest dropped by 18 funds last quarter.

As you can see these stocks had an average of 41.75 hedge funds with bullish positions and the average amount invested in these stocks was $1729 million. That figure was $144 million in ELAN’s case. Advance Auto Parts, Inc. (NYSE:AAP) is the most popular stock in this table. On the other hand Extra Space Storage, Inc. (NYSE:EXR) is the least popular one with only 24 bullish hedge fund positions. Compared to these stocks Elanco Animal Health Incorporated (NYSE:ELAN) is even less popular than EXR. Hedge funds were right about dumping ELAN and shifting their capital into more promising ideas. Our calculations showed that top 15 most popular stocks among hedge funds returned 19.7% through March 15th and outperformed the S&P 500 ETF (SPY) by 6.6 percentage points. Unfortunately ELAN wasn’t in this group. Hedge funds that bet on ELAN were disappointed as the stock lost 2.8% and underperformed the market. If you are interested in investing in large cap stocks, you should check out the top 15 hedge fund stocks as 13 of these outperformed the market.