The Insider Monkey team has completed processing the quarterly 13F filings for the December quarter submitted by the hedge funds and other money managers included in our extensive database. Most hedge fund investors endured a torrid quarter, which certainly propelled them to adjust their equity holdings so as to maintain the desired risk profile. As a result, the relevancy of these public filings and their content is indisputable, as they may reveal numerous high-potential stocks. The following article will discuss the smart money sentiment towards CVS Health Corporation (NYSE:CVS).

Is CVS Health Corporation (NYSE:CVS) a healthy stock for your portfolio? Hedge funds are in an optimistic mood. The number of long hedge fund bets went up by 28 lately. Our calculations also showed that CVS is among the 30 most popular stocks among hedge funds, ranking 22nd. CVS was in 77 hedge funds’ portfolios at the end of the fourth quarter of 2018. There were 49 hedge funds in our database with CVS holdings at the end of the previous quarter. 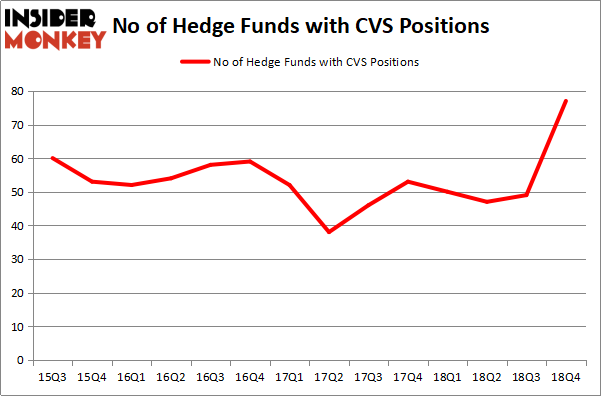 The largest stake in CVS Health Corporation (NYSE:CVS) was held by Glenview Capital, which reported holding $556.3 million worth of stock at the end of September. It was followed by Diamond Hill Capital with a $341.3 million position. Other investors bullish on the company included Millennium Management, Owl Creek Asset Management, and Adage Capital Management.

As one would reasonably expect, key hedge funds have jumped into CVS Health Corporation (NYSE:CVS) headfirst. Adage Capital Management, managed by Phill Gross and Robert Atchinson, assembled the most outsized position in CVS Health Corporation (NYSE:CVS). Adage Capital Management had $106.1 million invested in the company at the end of the quarter. Jim Simons’s Renaissance Technologies also made a $86.7 million investment in the stock during the quarter. The other funds with new positions in the stock are Farallon Capital, Samuel Isaly’s OrbiMed Advisors, and Josh Donfeld and David Rogers’s Castle Hook Partners.

As you can see these stocks had an average of 25.5 hedge funds with bullish positions and the average amount invested in these stocks was $854 million. That figure was $2831 million in CVS’s case. NextEra Energy, Inc. (NYSE:NEE) is the most popular stock in this table. On the other hand Banco Santander (Brasil) SA (NYSE:BSBR) is the least popular one with only 10 bullish hedge fund positions. Compared to these stocks CVS Health Corporation (NYSE:CVS) is more popular among hedge funds. Our calculations showed that top 15 most popular stocks among hedge funds returned 19.7% through March 15th and outperformed the S&P 500 ETF (SPY) by 6.6 percentage points. Unfortunately CVS wasn’t in this group. Hedge funds that bet on CVS were disappointed as the stock lost 14.5% and underperformed the market. If you are interested in investing in large cap stocks, you should check out the top 15 hedge fund stocks as 13 of these outperformed the market.