United Parcel Service, Inc. (NYSE:UPS) investors should be aware of an increase in hedge fund interest in recent months. Our calculations also showed that UPS isn’t among the 30 most popular stocks among hedge funds. 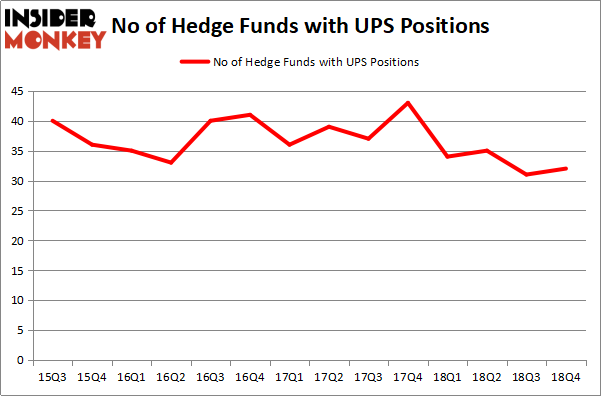 According to publicly available hedge fund and institutional investor holdings data compiled by Insider Monkey, Michael Larson’s Bill & Melinda Gates Foundation Trust has the largest position in United Parcel Service, Inc. (NYSE:UPS), worth close to $441.4 million, accounting for 2% of its total 13F portfolio. Sitting at the No. 2 spot is Two Sigma Advisors, managed by John Overdeck and David Siegel, which holds a $229.7 million position; the fund has 0.6% of its 13F portfolio invested in the stock. Some other peers with similar optimism comprise John Smith Clark’s Southpoint Capital Advisors, Boykin Curry’s Eagle Capital Management and Ken Griffin’s Citadel Investment Group.

As industrywide interest jumped, specific money managers have been driving this bullishness. Impala Asset Management, managed by Robert Bishop, initiated the most valuable position in United Parcel Service, Inc. (NYSE:UPS). Impala Asset Management had $18.9 million invested in the company at the end of the quarter. Dmitry Balyasny’s Balyasny Asset Management also made a $10.5 million investment in the stock during the quarter. The other funds with brand new UPS positions are Benjamin A. Smith’s Laurion Capital Management, Paul Cantor, Joseph Weiss, and Will Wurm’s Beech Hill Partners, and Claes Fornell’s CSat Investment Advisory.

As you can see these stocks had an average of 27.75 hedge funds with bullish positions and the average amount invested in these stocks was $854 million. That figure was $1158 million in UPS’s case. NVIDIA Corporation (NASDAQ:NVDA) is the most popular stock in this table. On the other hand Banco Santander (Brasil) SA (NYSE:BSBR) is the least popular one with only 10 bullish hedge fund positions. United Parcel Service, Inc. (NYSE:UPS) is not the most popular stock in this group but hedge fund interest is still above average. Our calculations showed that top 15 most popular stocks among hedge funds returned 19.7% through March 15th and outperformed the S&P 500 ETF (SPY) by 6.6 percentage points. Hedge funds were also right about betting on UPS as the stock returned 13.3% and outperformed the market as well.

Best Performing Hedge Funds Strategy
Download a free copy of our newsletter and see the details inside!
Hedge Fund Resource Center
Related News
United Parcel Service, Inc. (UPS): Are Hedge Funds Right About This Stock? 5 Biggest Companies That Might Be Disrupted By Blockchain Technology Top 10 Logistics Companies In The World In 2017 11 Companies With The Most Employees In The US Bill Gates’ Portfolio: 5 Dividend Stocks Held By The World’s Richest Man 11 Companies With A Competitive Advantage For Long-Term Investors Markets Snapshot: 31 Major Stories Telling What’s Happening in the Finance World Today Ten of the Most Common Addictions 13 African Countries with the Largest White Population in 2018 6 Causes of Human Trafficking in Africa, India, and US
Billionaire Hedge Funds