Hedge Funds and other institutional investors have just completed filing their 13Fs with the Securities and Exchange Commission, revealing their equity portfolios as of the end of June. At Insider Monkey, we follow nearly 750 active hedge funds and notable investors and by analyzing their 13F filings, we can determine the stocks that they are collectively bullish on. One of their picks is Trinseo S.A. (NYSE:TSE), so let’s take a closer look at the sentiment that surrounds it in the current quarter.

Trinseo S.A. (NYSE:TSE) was in 23 hedge funds’ portfolios at the end of June. TSE has seen an increase in activity from the world’s largest hedge funds of late. There were 19 hedge funds in our database with TSE holdings at the end of the previous quarter. Our calculations also showed that TSE isn’t among the 30 most popular stocks among hedge funds (see the video below).

At the moment there are a multitude of tools stock traders can use to grade publicly traded companies. Some of the most useful tools are hedge fund and insider trading interest. We have shown that, historically, those who follow the top picks of the top investment managers can trounce the S&P 500 by a very impressive amount (see the details here).

What have hedge funds been doing with Trinseo S.A. (NYSE:TSE)? 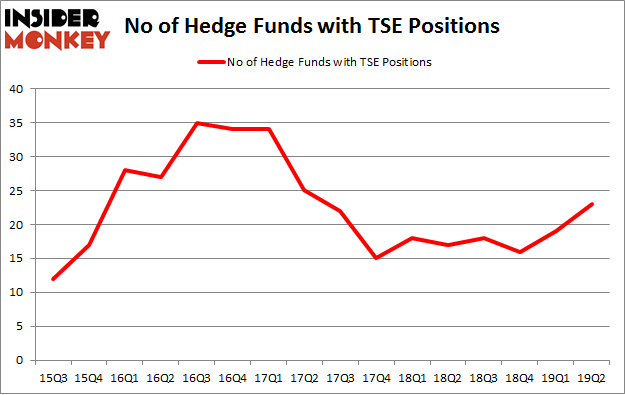 The largest stake in Trinseo S.A. (NYSE:TSE) was held by Renaissance Technologies, which reported holding $42.9 million worth of stock at the end of March. It was followed by GLG Partners with a $20.7 million position. Other investors bullish on the company included Citadel Investment Group, Two Sigma Advisors, and Shellback Capital.

Let’s go over hedge fund activity in other stocks – not necessarily in the same industry as Trinseo S.A. (NYSE:TSE) but similarly valued. We will take a look at Freshpet Inc (NASDAQ:FRPT), CSG Systems International, Inc. (NASDAQ:CSGS), CorVel Corporation (NASDAQ:CRVL), and Apellis Pharmaceuticals, Inc. (NASDAQ:APLS). This group of stocks’ market values are similar to TSE’s market value.

As you can see these stocks had an average of 18.5 hedge funds with bullish positions and the average amount invested in these stocks was $222 million. That figure was $116 million in TSE’s case. Freshpet Inc (NASDAQ:FRPT) is the most popular stock in this table. On the other hand CorVel Corporation (NASDAQ:CRVL) is the least popular one with only 15 bullish hedge fund positions. Trinseo S.A. (NYSE:TSE) is not the most popular stock in this group but hedge fund interest is still above average. Our calculations showed that top 20 most popular stocks among hedge funds returned 24.4% in 2019 through September 30th and outperformed the S&P 500 ETF (SPY) by 4 percentage points. Hedge funds were also right about betting on TSE, though not to the same extent, as the stock returned 2.5% during the third quarter and outperformed the market as well.