Were Hedge Funds Right About Betting On Zoetis Inc (ZTS)?

Zoetis Inc (NYSE:ZTS) was in 40 hedge funds’ portfolios at the end of the second quarter of 2019. ZTS has experienced an increase in hedge fund interest recently. There were 37 hedge funds in our database with ZTS holdings at the end of the previous quarter. Our calculations also showed that ZTS isn’t among the 30 most popular stocks among hedge funds.

Unlike some fund managers who are betting on Dow reaching 40000 in a year, our long-short investment strategy doesn’t rely on bull markets to deliver double digit returns. We only rely on hedge fund buy/sell signals. We’re going to take a glance at the fresh hedge fund action regarding Zoetis Inc (NYSE:ZTS). 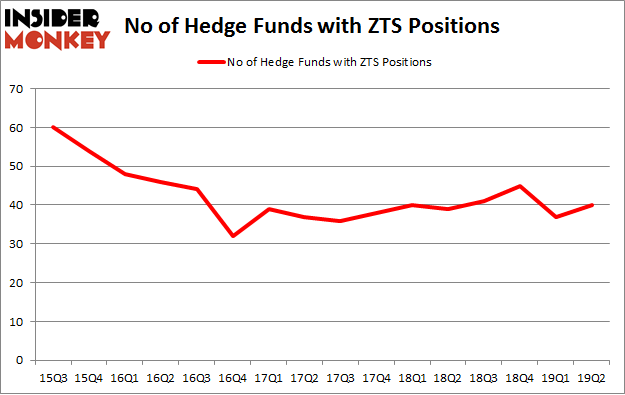 Among these funds, Cantillon Capital Management held the most valuable stake in Zoetis Inc (NYSE:ZTS), which was worth $420.9 million at the end of the second quarter. On the second spot was Marshall Wace LLP which amassed $273.2 million worth of shares. Moreover, Renaissance Technologies, AQR Capital Management, and Millennium Management were also bullish on Zoetis Inc (NYSE:ZTS), allocating a large percentage of their portfolios to this stock.

As you can see these stocks had an average of 52.25 hedge funds with bullish positions and the average amount invested in these stocks was $2539 million. That figure was $2061 million in ZTS’s case. ServiceNow Inc (NYSE:NOW) is the most popular stock in this table. On the other hand Schlumberger Limited (NYSE:SLB) is the least popular one with only 41 bullish hedge fund positions. Compared to these stocks Zoetis Inc (NYSE:ZTS) is even less popular than SLB. Hedge funds clearly dropped the ball on ZTS as the stock delivered strong returns, though hedge funds’ consensus picks still generated respectable returns. Our calculations showed that top 20 most popular stocks (see the video below) among hedge funds returned 24.4% in 2019 through September 30th and outperformed the S&P 500 ETF (SPY) by 4 percentage points. A small number of hedge funds were also right about betting on ZTS as the stock returned 9.9% during the third quarter and outperformed the market by an even larger margin.