We at Insider Monkey have gone over 700 13F filings that hedge funds and prominent investors are required to file by the SEC The 13F filings show the funds’ and investors’ portfolio positions as of December 31st. In this article, we look at what those funds think of SEI Investments Company (NASDAQ:SEIC) based on that data.

SEI Investments Company (NASDAQ:SEIC) shareholders have witnessed an increase in hedge fund sentiment recently. SEIC was in 25 hedge funds’ portfolios at the end of December. There were 24 hedge funds in our database with SEIC holdings at the end of the previous quarter. Our calculations also showed that SEIC isn’t among the 30 most popular stocks among hedge funds.

How have hedgies been trading SEI Investments Company (NASDAQ:SEIC)? 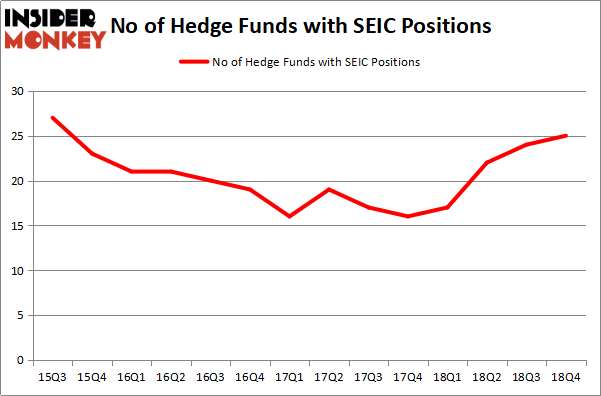 The largest stake in SEI Investments Company (NASDAQ:SEIC) was held by Millennium Management, which reported holding $58.9 million worth of stock at the end of September. It was followed by Arrowstreet Capital with a $49 million position. Other investors bullish on the company included Renaissance Technologies, Junto Capital Management, and Royce & Associates.

As aggregate interest increased, specific money managers were breaking ground themselves. Junto Capital Management, managed by James Parsons, assembled the biggest position in SEI Investments Company (NASDAQ:SEIC). Junto Capital Management had $23.3 million invested in the company at the end of the quarter. Sander Gerber’s Hudson Bay Capital Management also made a $1.5 million investment in the stock during the quarter. The other funds with new positions in the stock are Alec Litowitz and Ross Laser’s Magnetar Capital, Michael Gelband’s ExodusPoint Capital, and Hoon Kim’s Quantinno Capital.

Let’s now take a look at hedge fund activity in other stocks – not necessarily in the same industry as SEI Investments Company (NASDAQ:SEIC) but similarly valued. These stocks are Paycom Software Inc (NYSE:PAYC), Aramark (NYSE:ARMK), Snap Inc. (NYSE:SNAP), and Formula One Group (NASDAQ:FWONK). This group of stocks’ market valuations are closest to SEIC’s market valuation.

As you can see these stocks had an average of 27.5 hedge funds with bullish positions and the average amount invested in these stocks was $764 million. That figure was $287 million in SEIC’s case. Aramark (NYSE:ARMK) is the most popular stock in this table. On the other hand Snap Inc. (NYSE:SNAP) is the least popular one with only 17 bullish hedge fund positions. SEI Investments Company (NASDAQ:SEIC) is not the least popular stock in this group but hedge fund interest is still below average. Our calculations showed that the top 15 most popular stocks among hedge funds returned 21.3% year-to-date through April 8th and outperformed the S&P 500 ETF (SPY) by more than 5 percentage points. Hedge funds were also right about betting on SEIC, though not to the same extent, as the stock returned 20.5% and outperformed the market as well.