Hedge fund managers like David Einhorn, Bill Ackman, or Carl Icahn became billionaires through reaping large profits for their investors, which is why piggybacking their stock picks may provide us with significant returns as well. Many hedge funds, like Paul Singer’s Elliott Management, are pretty secretive, but we can still get some insights by analyzing their quarterly 13F filings. One of the most fertile grounds for large abnormal returns is hedge funds’ most popular small-cap picks, which are not so widely followed and often trade at a discount to their intrinsic value. In this article we will check out hedge fund activity in another small-cap stock: Enterprise Products Partners L.P. (NYSE:EPD).

Enterprise Products Partners L.P. (NYSE:EPD) has experienced an increase in activity from the world’s largest hedge funds recently. EPD was in 25 hedge funds’ portfolios at the end of December. There were 22 hedge funds in our database with EPD positions at the end of the previous quarter. Our calculations also showed that EPD isn’t among the 30 most popular stocks among hedge funds.

According to most traders, hedge funds are perceived as underperforming, old financial vehicles of yesteryear. While there are greater than 8000 funds trading today, We choose to focus on the leaders of this club, about 750 funds. Most estimates calculate that this group of people handle the lion’s share of the smart money’s total capital, and by observing their finest stock picks, Insider Monkey has unearthed many investment strategies that have historically outperformed the market. Insider Monkey’s flagship hedge fund strategy outperformed the S&P 500 index by nearly 5 percentage points a year since its inception in May 2014 through early November 2018. We were able to generate large returns even by identifying short candidates. Our portfolio of short stocks lost 27.5% since February 2017 (through March 12th) even though the market was up nearly 25% during the same period. We just shared a list of 6 short targets in our latest quarterly update and they are already down an average of 6% in less than a month.

What have hedge funds been doing with Enterprise Products Partners L.P. (NYSE:EPD)?

At the end of the fourth quarter, a total of 25 of the hedge funds tracked by Insider Monkey were long this stock, a change of 14% from one quarter earlier. The graph below displays the number of hedge funds with bullish position in EPD over the last 14 quarters. With the smart money’s sentiment swirling, there exists an “upper tier” of notable hedge fund managers who were upping their stakes significantly (or already accumulated large positions). 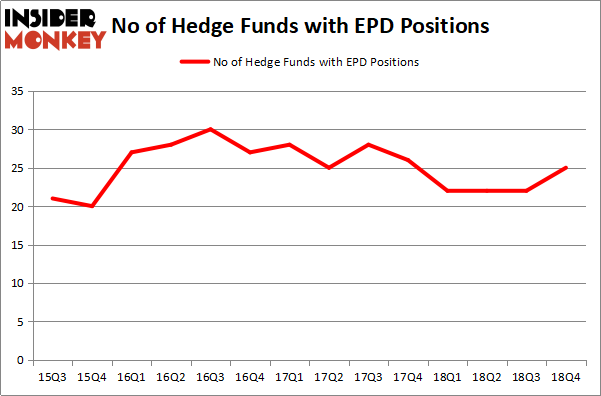 More specifically, Renaissance Technologies was the largest shareholder of Enterprise Products Partners L.P. (NYSE:EPD), with a stake worth $123.2 million reported as of the end of September. Trailing Renaissance Technologies was Zimmer Partners, which amassed a stake valued at $116.4 million. Wexford Capital, Perella Weinberg Partners, and Osterweis Capital Management were also very fond of the stock, giving the stock large weights in their portfolios.

With a general bullishness amongst the heavyweights, key money managers have been driving this bullishness. Everett Capital Advisors, managed by Kelly Hampaul, established the most valuable position in Enterprise Products Partners L.P. (NYSE:EPD). Everett Capital Advisors had $10.6 million invested in the company at the end of the quarter. Peter Rathjens, Bruce Clarke and John Campbell’s Arrowstreet Capital also made a $10.2 million investment in the stock during the quarter. The other funds with brand new EPD positions are George Soros’s Soros Fund Management, Matthew Hulsizer’s PEAK6 Capital Management, and Thiru Ramakrishnan’s TVR Capital.

As you can see these stocks had an average of 43 hedge funds with bullish positions and the average amount invested in these stocks was $6507 million. That figure was $415 million in EPD’s case. Shire PLC (NASDAQ:SHPG) is the most popular stock in this table. On the other hand Simon Property Group, Inc (NYSE:SPG) is the least popular one with only 26 bullish hedge fund positions. Compared to these stocks Enterprise Products Partners L.P. (NYSE:EPD) is even less popular than SPG. Our calculations showed that top 15 most popular stocks among hedge funds returned 19.7% through March 15th and outperformed the S&P 500 ETF (SPY) by 6.6 percentage points. Hedge funds were also right about betting on EPD, though not to the same extent, as the stock returned 16.2% and outperformed the market as well.